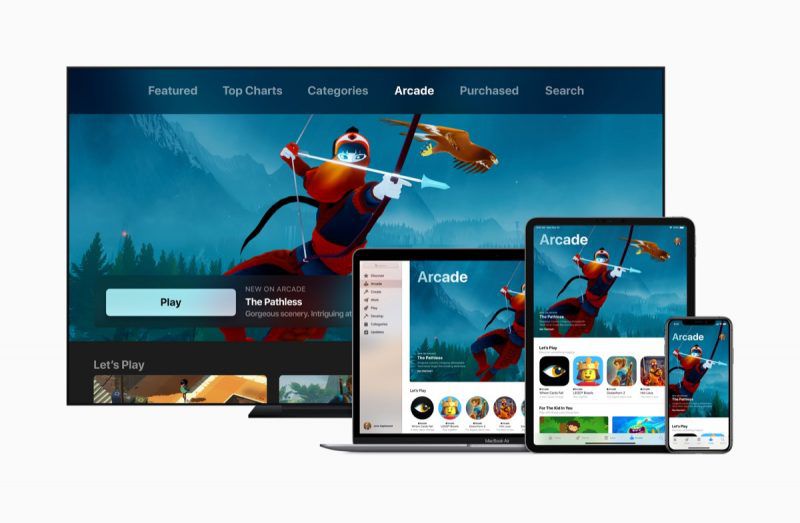 A subscription to Apple Arcade includes access to over 100 new and exclusive games that can be played both online and offline across iPhone, iPad, Mac, and Apple TV, and the whole family can play using Family Sharing with one subscription fee.

‌Apple Arcade‌ will have a dedicated tab on the App Store, and games will be curated by Apple's team of ‌App Store‌ editors. Apple says the emphasis will be on personalized recommendations, and Apple promises that ‌Apple Arcade‌ games cannot collect any data about the user without consent.


All ‌Apple Arcade‌ games will be all-you-can-play experiences, with all features, content, and updates included at no extra charge, and with no ads or in-app purchases necessary.


"The ‌App Store‌ is the world's biggest and most successful game platform. Now we are going to take games even further with ‌Apple Arcade‌, the first game subscription service for mobile, desktop and the living room," said Phil Schiller, Apple’s senior vice president of Worldwide Marketing. "We are working with some of the most innovative game developers in the world to create over 100 new and exclusive games to play across ‌iPhone‌, ‌iPad‌, Mac and ‌Apple TV‌. ‌Apple Arcade‌ games will be great for families, respect user privacy and will not have ads or require any additional purchases. We think players of all ages are going to love ‌Apple Arcade‌."

ondert
Meh... this is another insult for Mac users, for me. So, they just downgraded the gaming on Mac to mobile level.
Why should I trust Apple for gaming?? They never offered top gpu options to play games properly and macOS was always behind Windows when it comes to optimization for games.
Score: 25 Votes (Like | Disagree)

Yr Blues
I hate the future now. It's all subscription services.
Score: 20 Votes (Like | Disagree)

"Stay a while, staaaaaay forever."

(Topical gaming reference for the older gen there) :D
Score: 16 Votes (Like | Disagree)

What? There are literally no games for macOS. It’s the ********* platform on earth for gaming, even Linux is better.

Are you drunk or something? There are more than 20,000 games for Mac on Steam alone, including super popular titles like Counter-Strike or Rocket League. Linux has just about 12,000. Plus, with Fortnite, one of the most popular games at the moment is available for Mac, but not for Linux.
Score: 11 Votes (Like | Disagree)

lilrush
Xbox game pass is 10$ a month and an xbox is cheaper than any apple device lol, what was Apple thinking?
Score: 10 Votes (Like | Disagree)
Read All Comments