Apple today updated its Events app for the fourth and fifth-generation Apple TV in preparation for the March 25th "Show Time" event that's expected to focus on the company's upcoming TV and Apple News services. 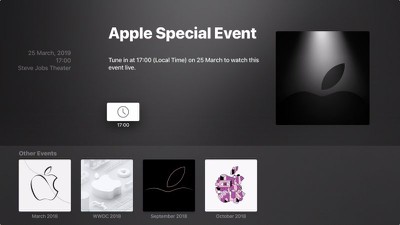 The updated Events app can be downloaded from the tvOS App Store, and features the same darkened movie theater style from the media invites that were sent out last week.

In terms of event announcements, Apple is known to be working on a $9.99 per month subscription news and magazine service that would give ‌Apple News‌ users unlimited access to stories from paywalled sites like The New York Times and the Washington Post.

Apple is also working on a streaming TV service that will include the more than two dozen TV shows and movies that it has in the works, along with access to subscription content from other cable providers.

We're still expecting minor updates for a number of Apple products, including the AirPods and iPod touch, and potentially the launch of new iMacs and the long-awaited AirPower, although given that Apple announced new iPads on Monday, it's likely any further hardware launches will come separately before or after the event via press release.

Apple's Events app, along with the Events section of Apple's website, will be used to live stream the unveiling of the new services. The March 25 event will take place at 10:00 a.m. Pacific Time (1:00 p.m. Eastern Time, 5.00 p.m. Greenwich Mean Time) at the Steve Jobs Theater on the Apple Park campus.

For those who are unable to watch Apple's live stream, MacRumors will have live coverage of the event on MacRumors.com and on our MacRumorsLive Twitter account.

Aluminum213
Just announce the air pods 2 already, the only thing people care about with this useless event
Score: 2 Votes (Like | Disagree)

ipedro
I know rumours say no hardware, but I don’t know how Apple doesn’t update the Apple TV itself at this event.

The service is almost certainly going to be called “Apple TV” as has been demonstrated by the name of the app in the App Store and the twitter account Apple created for TV content. So at the very least they’re going to have to rename the box itself.

Perhaps it won’t be a box but instead an app available to TV manufacturers or controlled via AirPlay from an iPhone/iPad/Mac. Maybe there’ll be an HDMI AirPlay stick for TVs without AirPlay.

Whatever the case, I’m strongly suspicious of an update of the AppleTV hardware at this event.
Score: 2 Votes (Like | Disagree)

Peel
With DTV NOW's recent announcement of raising their rates by $10/mo, I'm really hoping this new TV service will be a reasonable alternative spur price lowering from the competition. Like when Apple introduced Apple Music, and made Pandora and Spotify rethink their pricing structures.
Score: 1 Votes (Like | Disagree)
Read All Comments