Apple Courting Publishers by Comparing News Service to Apple Music, but Most Say Logic is Flawed

With less than one week to go until Apple's "It's Show Time" media event, the company is said to still be courting major news companies to join its revamped Apple News subscription service (via Business Insider). The debut of this service is expected to occur alongside the big focus of the event, Apple's streaming TV service. 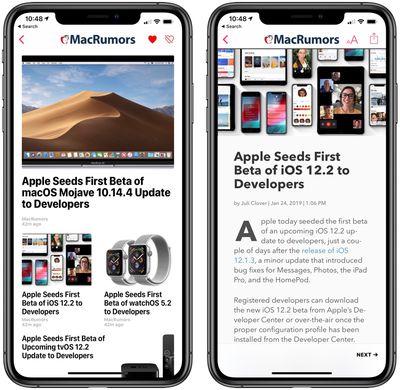 During Apple's meetings with news publishers, the company is reportedly pointing to Apple Music to showcase evidence of its previous subscription success and convince partners to join. One source said that the company is pitching itself as a savior to the publishing industry, but some publishing executives have said that Apple's logic is flawed.

But the critics say that comparison is flawed. Music, along with entertainment, is inherently different from news. A lot of news articles are interchangeable in a way that music artists or movies aren't. Plus, most people don't want 100 magazines; they just want the ones they're already fans of.

The revamped ‌Apple News‌ service is rumored to use Apple's acquisition of Texture to combine subscriptions to magazine and news sites for one monthly fee. But, one digital publishing executive went so far as to say that "no one wants an all-you-can-eat magazine service." The executive, whose company won't be participating with Apple in its new enterprise, went on to say that "magazines are passion points, whereas music, you do want a library."

Apple is said to still be courting major newspapers, but The New York Times and The Washington Post have yet to join according to sources. Some publications do see a benefit to Apple's service, however, and are working on deals to join, like The Wall Street Journal.

In general, publishers also have many questions that Apple has yet to answer, a sentiment that seems to be a running theme for the March 25 event, as the exact same concern was raised by Hollywood insiders partnering with Apple's streaming TV service. For the news side, publishers wonder about how much reader data they will see, brand visibility, loss of direct subscribers in favor of the ‌Apple News‌ bundle, if the service will have a presence on Android, and more.

The reveal of the ‌Apple News‌ and streaming TV services isn't too far away now, as Apple's "It's Show Time" event will kick off at 10:00 am Pacific Time on Monday, March 25.

jjhny
I read such range of news sources that getting stuck with the establishment narrative is highly unappealing.

I really can't stand 'curated' anything at this point, as it is all of the same dull, monotonous mindset.
Score: 9 Votes (Like | Disagree)

Apple Courting Publishers by Comparing News Service to Apple Music, but Most Say Logic is Flawed

Well, maybe they can use Ableton or something.
Score: 5 Votes (Like | Disagree)

That's the old model. In a digital world, you can appeal to both the consumers who are devoted to that "niche" as well as the much larger and vast audience who would enjoy a particular article, e.g., I may not be a devotee of Vanity Fair in general and would never pay for it, but they sometimes have great articles on a particular subject. Apple's new service can uniquely expose that article to a likely tens of millions of folks who will subscribe to a news/magazine service that will put a huge number of eyeballs, think advertising rates, who would never otherwise see that article and accompanying ads.
[doublepost=1553014056][/doublepost]
Score: 5 Votes (Like | Disagree)

Frankied22
I think this whole news subscription is silly. There is a reason none of these other news subscription services ever took off mainstream - the majority of people don't give a **** about paying for news they can get anywhere else on the internet for free. Journalism today is a joke and so is most news articles. It's a race to get clicks with the most clickbait headlines and meaningless articles to drive search traffic. It's garbage standing upon advertising, and most people don't care. People say well if you pay for news then we will get better news! I say yea right, keep dreaming. Real journalism is pretty much dead and news is mostly one-sided propaganda ********. Theres no going back now that people's attention spans are no longer than reading a headline and the written word is plastered all over the internet for free.

Apple are in la la land on this one.
Score: 5 Votes (Like | Disagree)

It’s hard to see who this service will appeal to. There’s so much free, professional-quality news out there.

I'm currently paying $20 a month for the Wall Street Journal, $4 a month for Washington Post through the Amazon Prime special, and $10 a month for my local Gannett owned news source. I am willing to pay for well written, researched, generally reliable news sources. Too much of the "free" stuff is click-bait (although the WP can get to be a little muddled in their split between news and opinion)

All are otherwise paywalled. If I can get the same content for $10 a month for Apple News then I'll be saving almost $300 per year.
Score: 5 Votes (Like | Disagree)
Read All Comments