Kuo: Apple's AR Glasses to Launch in 2020 as iPhone Accessory

Apple's first rumored head-mounted augmented reality device could be ready by the middle of next year, according to a new report out today from Apple analyst Ming-Chi Kuo (via Economic Daily News [Google Translate]).

A fanciful mockup of digital glasses via TechAcute
According to Kuo, Apple's AR glasses will be marketed as an iPhone accessory and primarily take a display role while wirelessly offloading computing, networking, and positioning to the ‌iPhone‌.

Designing the AR glasses to work as an ‌iPhone‌ accessory is also expected to allow Apple to keep the glasses slim and lightweight, rather than trying to pack in all the processing hardware into the one device.

Kuo believes Apple is aiming to begin mass-producing the glasses as early as the fourth quarter of this year, although he admits the timeframe could be pushed back to the second quarter of 2020.

Back in November 2017, Bloomberg reported that Apple was developing an AR headset and aimed to have it ready by 2019, although the company could ship a product in 2020. The report said the headset would run on a new custom operating system, based on iOS, and dubbed "rOS" for "reality operating system."

Apple has been exploring virtual reality and augmented reality technologies for more than 10 years based on patent filings. The company is also rumored to have a secret research unit comprising hundreds of employees working on AR and VR, exploring ways the emerging technologies could be used in future Apple products.

EvilEvil
Yet another Apple accessory to make you look like a douchebag: 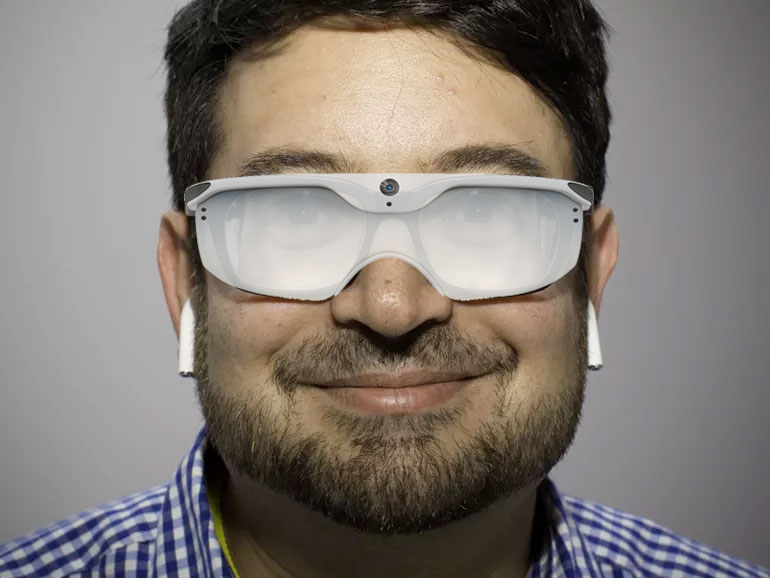 nwcs
One day, actual reality will be cool again.
Score: 23 Votes (Like | Disagree)

Apple CEO Tim Cook has talked up the prospect of augmented reality several times, saying he views AR as "profound ('https://www.macrumors.com/2017/11/02/tim-cook-on-augmented-reality/')" because the technology "amplifies human performance instead of isolating humans."

Go to the coffee shop of your choice and look around: two people - presumably friends - at the same table, earbuds in and on their phones. Or a restaurant - parents on their phones and kids with an iPad. Don’t see how tech has done anything BUT isolate humans.
Score: 23 Votes (Like | Disagree)

robinp
It's going to be a huge ask to get the general public to wear anything even vaguely resembling the mock up. Cameras on glasses like this is just going to make people behave really weirdly (understandably) around people wearing them. That's assuming they are something that even looks good in the first place.

It will be interesting to see what Apple does with this really really hard design challenge.
Score: 20 Votes (Like | Disagree)

It's going to be a huge ask to get the general public to wear anything even vaguely resembling the mock up. Cameras on glasses like this is just going to make people behave really weirdly (understandably) around people wearing them. That's assuming they are something that even looks good in the first place.

It will be interesting to see what Apple does with this really really hard design challenge.

“Can’t believe apple is seriously expecting people to wear watches again when people can use their phone to tell time. Just what in the hell are they thinking??” - people from 2015

Calling it now. Because nobody has any vision, everyone under the sun is going to already call it a stupid product before it’s even announced. Then it’ll debut and people will love it, while it’ll have its haters as well saying it’s stupid and pointless. “Who is seriously gonna wear glasses all the time?”

Then it’ll get popular and really refined and everybody else’s will copy them and we will get to a point a few years from now where we can’t believe we never had ar.

Sci fi movies imagine this for years. Holographic displays and graphics and being able to manipulate objects. And we all think it’s the coolest thing ever. Think minority report. Think iron man. Think tron. Think about not even needing a tv in your house because you can put a giant display and pin it to your wall in your glasses. Think about how interactive the environment can be. Meeting people and seeing information floating over their heads about who they are and how you know them. Or shared experiences with multiple glasses.

This could be a game changer the world over if it’s played right. But all anyone can say is “who’s gonna wear glasses all the time?”
Score: 17 Votes (Like | Disagree)

tevion5
When someone finally does this right, we could be looking at a tech shift as big as the iPhone/smartphone.
Score: 15 Votes (Like | Disagree)
Read All Comments

Tuesday October 27, 2020 4:14 am PDT by Tim Hardwick
The first iMac powered by Apple Silicon is set to arrive in the first half of next year and will feature a desktop class "A14T" chip, according to Chinese-language newspaper The China Times. Codenamed "Mt. Jade," Apple's first custom-made desktop processor will be twinned with its first self-developed GPU, codenamed "Lifuka," both of which are being produced using TSMC's 5-nanometer process, ...
Read Full Article • 282 comments

Monday October 26, 2020 3:38 pm PDT by Juli Clover
Alongside the iPhone 12 and 12 Pro models, Apple introduced a new MagSafe charger that attaches to the magnetic ring in the back of the devices, providing up to 15W of charging power, which is double the speed of the 7.5W Qi-based wireless charging maximum. Apple does not provide a power adapter with the $39 MagSafe charger, requiring users to supply their own USB-C compatible option. Apple...
Read Full Article • 437 comments

Tuesday October 27, 2020 12:36 pm PDT by Joe Rossignol
Last week, a listing appeared in the Bluetooth product database for an Apple product with a placeholder name "B2002" and a model number of "TBD." MacRumors was alerted to the listing by health and fitness tech website MyHealthyApple. The product is filed under the "personal computer" category, which Apple has used for previous Mac and iPad listings in the database, so it is hard to pinpoint...
Read Full Article • 31 comments

Wednesday October 28, 2020 10:15 am PDT by Juli Clover
Apple today seeded a new macOS Big Sur 11.0.1 beta to developers for testing purposes, with the new beta replacing the existing macOS Big Sur 11 beta 10 update that was released two weeks ago. The macOS Big Sur beta can be downloaded through the Apple Developer Center and once the appropriate profile is installed, subsequent betas will be available through the Software Update mechanism in...
Read Full Article • 229 comments