Apple today announced that American Airlines, Dexcom, Caviar, Merriam Webster, and Spectre have added Siri Shortcuts support to their apps this week. Airbnb, Drop, ReSound, and Smarter also plan to add ‌Siri‌ Shortcuts integration to their apps over the next few months. 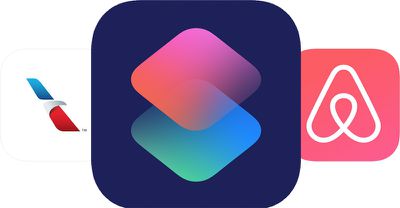 Apple provided us with a summary of how ‌Siri‌ Shortcuts works in each app:

Subscribe to MacRumors on YouTube for more videos
‌Siri‌ Shortcuts let you create voice and tap-activated automations that can complete multiple complex tasks in just a few seconds. The feature is available in the Settings app under ‌Siri‌ & Search and through the dedicated Shortcuts app.

Update: Apple has since highlighted several of these ‌Siri‌ Shortcuts apps in a press release.

Does anyone actually use Siri?

What kind of question is this? I swear I’m dumbfounded sometimes by that cynicism in MacRumors forums. It was predictable that people would immediately start ragging on Siri, and making comments that feel three years old. I use Siri 30 times a day. Siri is incredibly useful and powerful, and gets more so on a regular basis. Anyone with an iPhone, iPad or HomePod who doesn’t use Siri on the regular is living in the past and not maximizing their time, nor their investment. Complaining about Siri is an easy, tired bit. Siri does things that Alexa can’t touch, and handles general language better than Alexa, which requires more narrow, precise commands. A recent study with 800 queries showed that Siri made huge gains over the past year and is now second only to Google Assistant. Shortcuts is a fantastic app that has expanded Siri use to dozens of new services and activities for me. I can’t wait to see what Apple does with Siri at WWDC this June. Based on the progress they’ve made in the past year and a half, and with the ex-Google guy now the VP in charge of machine learning, I’m expecting big things.
Score: 7 Votes (Like | Disagree)

Siri shortcuts could be/is a way to compete with Alexa ‘skills’ if marketed correctly.

Siri shortcuts built into apps is likely going to be more successful than Alexa skills. The reason being that if you choose to use an App, and the App has one or two Siri skills built in, you've solved the discovery problem, and more importantly, you've solved the relevancy problem. Surveys show that Alexa's "skills" are a lot of hype. Almost no one uses those obscure "skills." A recent major survey showed that the majority of people haven't used a single Alexa "skill" beyond the basic ones. In terms of smart speakers, for example, people use them almost exclusively to listen to music/pod casts, check weather. set timers, control lights, and check messages. All of these and more Siri does great on, with far superior sound quality.

Siri, like all of them, is still in the infant stage with a lot of room for improvement, but I use Siri everyday to set alarms, reminders, make phone calls, check and send messages, check my calendar, check on weather, sport scores, traffic, control my Homekit lights, and of course listen to great sounding music and podcasts. She is spot on the vast majority of times for these simple tasks (in the not too distant past, this would have been considered science fiction:)) but again, I look forward to seeing the fruits of investments like VocalIQ where Siri can decode more natural language and sequential conversations, etc.
Score: 3 Votes (Like | Disagree)

No. It’s not. A truly smart Siri would have more knowledge, understand more context, be pro-active, etc. But Shortcuts doesn’t require any artificial intelligence. It’s just pre recorded sentences the user has to program and remember exactly in order to trigger a workflow. After a few weeks I already forgot most sentences I recorded so for me the feature is more or less useless.

Siri works fine for my requests. If you forgot what you set it as that sounds like a you problem.

What does siri not do that I need it to? What do other assistants do that I need? I have several alexa and google home devices at home so I can test.
Score: 2 Votes (Like | Disagree)

Quite the opposite. Shortcuts makes siri quite a bit smarter and gives it functionality beyond what anyone else has.
Score: 2 Votes (Like | Disagree)

Does anyone actually use Siri?

It's actually the most used digital assistant in the world, used billions of times a week and in more languages by far than any other digital assistant. No, it doesn't have as many built in skills as Alexa, such as farting on command, but for things people actually use their smart speakers for, Siri does them all and does them well. Indeed, in a most recent "test" by a major tech pub, Siri was close to Google and well ahead of Alexa and Cortana.
Score: 2 Votes (Like | Disagree)
Read All Comments