Tim Cook on Health Records Privacy: 'People Will Look at This and Feel That They Can Trust Apple'

In an NPR piece on the privacy of storing health records on the iPhone, Apple CEO Tim Cook this week said that Apple is a company that people can trust with sensitive information. 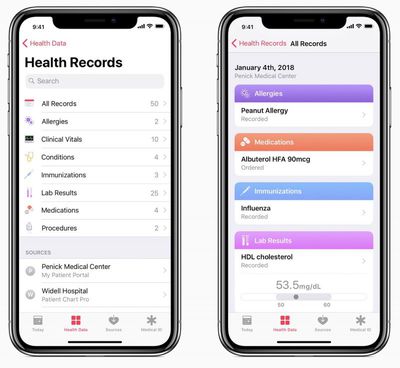 As evidence, Cook said that Apple has always avoided selling user data, something that Cook and other executives have repeated time and time again.

In an interview with NPR, Cook says acquiring user data to sell ads is something his company has avoided. "People will look at this and feel that they can trust Apple," he says. "That's a key part of anyone that you're working with on your health."

Apple executives have always pointed out that its customers are not its product, something that distinguishes Apple from other tech companies like Google and Facebook that rely heavily on user data for marketing and monetization purposes. According to Cook, Apple's privacy commitment is serious and not something that the company says just to earn customer trust.

"It's not the way we look it in terms of advantages," he says. "The reality is that I know for me, I want to do business with people that have my health data, people that I deeply trust."

Sam Cavaliere, a tech worker who uses Health Records and was featured in the NPR article, says Apple has earned his trust. "I don't get fed advertisements for them, so I don't see them trying to monetize it," he said, going on to explain that he's "comfortable" with what Apple's doing.

UCSD Health likes the fact that all record data is stored on device only and not uploaded to the cloud, something that helps to protect patients.

NPR pointed out recent news that certain health-related apps like period trackers and heart rate monitoring apps were sharing data with Facebook for targeted advertising, but Apple clarified that those apps don't, of course, connect to Health Records, which is a highly protected and restricted feature. Health app access in general can only be granted with explicit user permission.

Longhurst says that even though the Health app is well protected by Apple, there are "potential risks" and patients that use the feature should stay informed to make sure they're not inadvertently sharing health data with third parties.

Baymowe335
As much snark as will come from this, I personally wouldn't rank another company higher than Apple for data privacy.

There are always mistakes, but at least they try to keep your data private and it's one of their company messages.

A lot of these other tech companies make no effort to pretend they care about your privacy.
Score: 46 Votes (Like | Disagree)

Keep taking about privacy instead of improving your products and pricing.
.

Although I don’t agree with Apple’s inflation with their pricing across the product line, Tim Cook discussion privacy is equally important to the consumer, because they need to know Apples stance in a world of where data infiltration happens quite frequently. You can disagree all you want, but I commend Tim Cook for his efforts assuring consumers data is protected.
Score: 21 Votes (Like | Disagree)

Keep taking about privacy instead of improving your products and pricing.

All while that fat cheque from Google keeps coming in.
Score: 20 Votes (Like | Disagree)

Right on Apple! It’s not like you flubbed a FaceTime privacy bug fix or let FB continue to mine iOS’ user data.

There’s a difference between mistakes and an intentional business model.
Score: 12 Votes (Like | Disagree)

Keep taking about privacy instead of improving your products and pricing.

All while that fat cheque from Google keeps coming in.

Apple products are constantly improving. The pricing is fair to millions of happy customers. Maybe you logged into the wrong forum.
[doublepost=1551307712][/doublepost]Apple is one of the best companies in the world for protecting privacy. Cheers.
Score: 10 Votes (Like | Disagree)
Read All Comments