It's no secret that Facebook is harvesting incredible amounts of data on all of its users (and some that don't even use the service), but what may come as a surprise is just how detailed and intimate some of that data is.

A report from The Wall Street Journal takes a look at some of the apps on iOS that provide data to Facebook, with that info then used for advertising purposes. 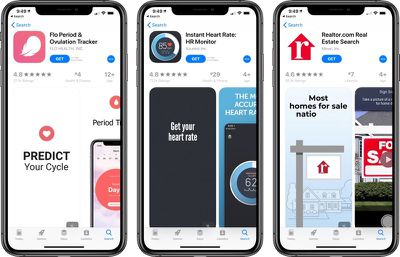 Instant Heart Rate: HR Monitor, for example, the most popular heart rate app on iOS, sent a user's heart rate to Facebook right after it was recorded in The Wall Street Journal's testing. Flo Period & Ovulation Tracker, which has 25 million active users, tells Facebook when a user is having a period or is intending to get pregnant.

Realtor.com, meanwhile, provides Facebook with the location and price of listings that a user viewed. With Flo in particular, it says it does not send this kind of sensitive data in its privacy policy, but then goes ahead and does so anyway.

Many of these apps are sending this data without "any prominent or specific disclosure," according to The Wall Street Journal's testing. Facebook collects data from apps even if no Facebook account is used to log in and even if the user isn't a member of Facebook.

Apps are sharing this data to take advantage of Facebook analytics tools that allow them to target their users more precisely with Facebook ads.

Apple does not require apps to disclose all of the partners that they share data with, and while certain personal information can be blocked, like contacts or location, more sensitive data, like health and fitness details, can be readily shared by these apps as there's no option to turn off this kind of data sharing.

Users can turn off Facebook's targeted advertising, but have no way to prevent apps from surreptitiously sending collected data to Facebook in the first place.

Facebook claimed that some of the data sharing The Wall Street Journal uncovered violates its business terms, and has asked these apps to stop sending information app users would consider sensitive.

"When we hear of any developer violating these strict privacy terms and guidelines, we quickly investigate and, if necessary, take immediate action," the company said.

At least 11 out of the 70 apps tested by The Wall Street Journal were sending sensitive user data to Facebook, including six of the top 15 health and fitness apps. There's little end users can do, except for be wary of the apps they're choosing to download. Apple in the future could introduce more stringent guidelines and policy controls that would better put a stop to this kind of intrusive data harvesting.

The Wall Street Journal's full report, which is well worth reading, offers more detail on how it tested these apps and how some of the apps responded.

The massive amount of people using Facebook is what has allowed it to garner this type of power with third parties. Facebook continues to have massive scandals and the same people who are outraged go and check on it two minutes later. People need to stop using it, delete their accounts, and eventually it will not have this kind of power.
Score: 103 Votes (Like | Disagree)

tzm41
Woof, and people keep talking about the walled garden protecting them
Score: 62 Votes (Like | Disagree)

The wall garden has is showing its holes.

Apple and especially Tim Cook , mr. Caraokee give a ... about privacy. It’s just a marketing instrument.
And his Stanford speech is just the topping on all that.

How is Apple supposed to prevent this? Spend a week analyzing each release of each app, after it has been released (because developers can change the behavior on-the-fly by building in date checks or server checks), and from random coffee shops (because developers can detect Apple's IP range and prevent bad behavior while the reviewers are reviewing the app)?
Score: 44 Votes (Like | Disagree)

In this particular case it doesn't matter if you stop using it. They are still getting your data from other apps you use. Just delete any apps that are found to be doing this. Or turn off all your technology and go live out in the woods. Seems that might be the only way to maintain privacy these days. Smh.
Score: 29 Votes (Like | Disagree)
Read All Comments

Sunday October 2, 2022 6:41 am PDT by Joe Rossignol
Apple is developing new iPad Pro, Mac, and Apple TV models, and at least some of these products will be released in October, according to Bloomberg's Mark Gurman. However, Gurman continues to believe that Apple is unlikely to hold an event this month. In the latest edition of his Power On newsletter, Gurman said "the big iPhone 14 unveiling last month was probably it for Apple in 2022 in...
Read Full Article • 146 comments