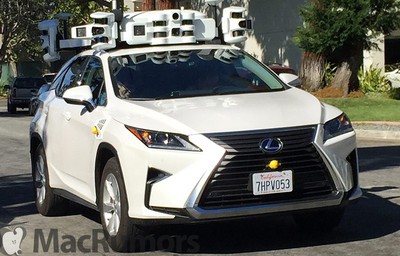 Apple explains how its autonomous vehicles work, which is basic self-driving vehicle functionality. The software senses what's around it, such as other vehicles, bicycles, or pedestrians using LiDAR, radar, and cameras before a planning component pulls that information together to predict what will happen next.

Apple analyzes every action that the system takes, especially scenarios and malfunctions where the safety driver is required to take over. Apple vehicles were in two accidents in 2018, though neither was the fault of the self-driving system and self-driving mode was only activated in one instance.

All proposed changes to our ADS software are first subjected to rigorous and comprehensive simulation testing that evaluates the software against predetermined criteria. After passing these simulation tests, the entire system then undergoes on-road testing at closed-course proving grounds. Software changes may be nominated for operation on public roads only after passing this array of extensive simulations and closed-course proving ground tests.

Software that passes to public road testing is incrementally deployed across the test vehicle fleet, with each stage monitored and analyzed. Additionally, changes deemed safety-critical undergo an extra phase of testing conducted by our most experienced drivers and operators.

All in all, Apple's white paper is rather dull and contains information shared by most companies that operate self-driving vehicles, but there are some interesting tidbits and insights into the company's focus on safety and secrecy.

All vehicles go through daily inspections and functionality checks before each outing, and Apple holds daily meetings with safety drivers to review software information and test routes.

Each vehicle is monitored by a safety driver and an operator, with Apple's safety drivers required to undergo rigorous training that includes a defensive driving course, classroom instruction, simulations, operational training, and supervised public road driving.

Drivers must keep both hands on the wheel at all times, work one shift per day, and are required to take frequent rest breaks to stay alert while driving.

Apple is still in the early stages of development on its autonomous driving software, and rumors have suggested the company could potentially release some kind of vehicle in 2023 to 2025.

Vehicles are equipped with a "persistent visual display" of the systems' mode, visible and audible signals when the system returns control to the safety driver, and "multiple, redundant, and fault-tolerant" mechanisms for taking control of the vehicle. Steering, braking, and acceleration commands have set limits to ensure actions can be safely anticipated and interrupted by the driver.

For more on Apple's car project, make sure to check out our Apple Car roundup.

Friday June 18, 2021 9:41 am PDT by Sami Fathi
After a long wait, YouTube for iOS is officially gaining picture-in-picture support, allowing all users, non-premium and premium subscribers, to close the YouTube app and continue watching their video in a small pop-up window. In a statement to MacRumors, YouTube says that picture-in-picture is currently rolling out to all premium subscribers on iOS and that a larger rollout to all US iOS...
Read Full Article • 187 comments