Hiring Jadallah is the latest signal that Apple plans to get serious about its own efforts in the home. Recently, the company acquired a start-up called Pullstring, a start-up that specializes in voice-enabled toys. That purchase could help the smartphone maker become the center of a connected living room.

Apple has been making movement into the home space for years, with the introduction of HomeKit as well as the HomePod which is powered by Siri. ‌HomePod‌, however, has lagged behind its competitors despite making steady improvements. Apple's latest hire as well as recent acquisition of a voice technology company seems to indicate that they are refocusing their efforts. 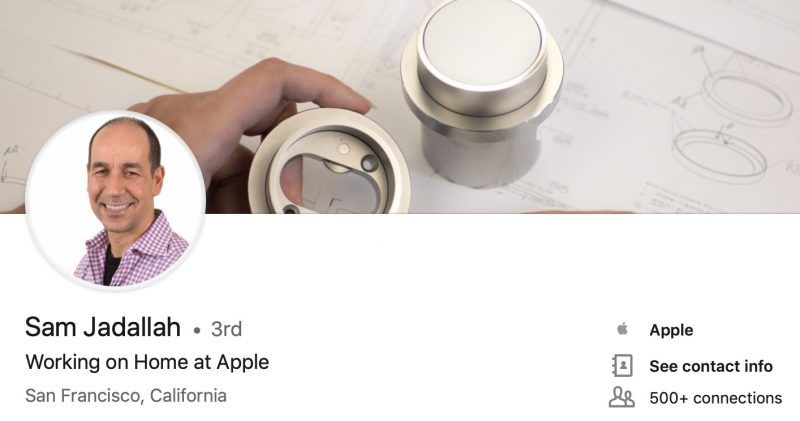 Jadallah was most recently CEO of failed smart lock company Otto. Otto was described as a "luxury smart lock":

With Bluetooth and Wi-Fi radios packed inside the surprisingly compact design, Otto promises to let you or anyone you choose inside with just a touch whenever it senses an authorized phone within range.

That company ultimately failed, but it appears that Jadallah will be applying that knowledge forward at Apple.

AppleFan91
They are way behind google and amazon. Siri has to become smarter and Apple has to be more serious about a smart speaker than just the HomePod. It’s fine, but it can’t be their only entry. Amazon and Google penetrate millions of homes by have stuff like the echo dot and google home mini - cheap entries into smart speakers.
Rating: 19 Votes

BasicGreatGuy
Apple is definitely in need of some help in this area.
Rating: 17 Votes

Kai Wang
Joke’s on you. My generation will never be able to afford a home lol
Rating: 17 Votes

Robert.Walter
Apple us a major laggard in home space.

Could have had “ Secure” brand with thermostats, security, smoke/CO, instead of leaving space open for Amazon.

In terms of capabilities, what Amazon calls “Skills”, HomePod is quickly catching up with Siri Shortcuts, enabling iOS apps to perform functions from a HomePod. What’s more, Shortcuts are easy for developers to turn on in Xcode, rather than having to purposefully write a Skill like Alexa requires. If they have an app, then turning on Shortcuts makes it compatible with HomePod. So, we’ll see Siri catch up quickly. Hundreds of apps have already added Shortcuts in the 5 months that it’s been out.


You should update your reading comprehension. Apple is behind Google and Amazon in smart home adoption and market penetration, which is clearly what I was talking about.
Rating: 10 Votes

dguisinger
The brain drain at Apple is so bad that they didn't have anyone internally with an idea of how to run their smart home team? Seriously? Leadership starts at the top. They can't get Siri right, they can't get the Macs right.... who really needs an Apple self driving car or another expletive streaming service? The only part of Apple right now doing a great job is their custom silicon team. I really wish they'd shake up company leadership, the fish rots from the head. All of their teams seem to be running along with no clear vision.
Rating: 9 Votes

They’re already in tune with Apple in the design sense and have the potential to expand beyond locks and doorbells. They were acquired by the world’s biggest lock company so I think they’re now off limits.

I could see August expanding into door and window sensors next and beyond that into cameras and a thermostat.

Had Apple acquired August, they would’ve had, pardon the pun, a turn-key operation.
Rating: 9 Votes

Had to look them up. I've never heard of Assa Abloy.

Ever heard of Yale locks? Assa Abloy is the parent company. They’re the biggest lock company in the world, it doesn’t even come close. Now they own August which is a very well known brand in smart home products. They’re well positioned to be competitive in the smart home space going forward.
Rating: 9 Votes


I did some reading on Jadallah and it turns out that he wasn’t just the CEO of Otto. It was his company. Apple has essentially acquired a ready made, yet unreleased smart lock.

This thing is extremely well built and impossibly small, considering the other smart locks out there that are at least twice the size of Otto and have cheap plastic gears.

I’m not sure Apple is going to start releasing its own smart home products other than HomePod, but if they do, they could go the route that Microsoft has taken with Surface and Google is doing with Pixel. Release a reference device and encourage third parties to release their own versions to grow variety in the market with plenty of choice.

If they do, I’d like to see this under an arms length sub company like Apple has done with Beats. I don’t know if we need Apple branded everything. In terms of capabilities, what Amazon calls “Skills”, HomePod is quickly catching up with Siri Shortcuts, enabling iOS apps to perform functions from a HomePod. What’s more, Shortcuts are easy for developers to turn on in Xcode, rather than having to purposefully write a Skill like Alexa requires. If they have an app, then turning on Shortcuts makes it compatible with HomePod. So, we’ll see Siri catch up quickly. Hundreds of apps have already added Shortcuts in the 5 months that it’s been out.

IMO “Shortcuts” seem like a bandaid for something that doesn’t work as promised... actually, and let’s put innovation aside, what has Apple done recently that “Just Works”?
Rating: 7 Votes