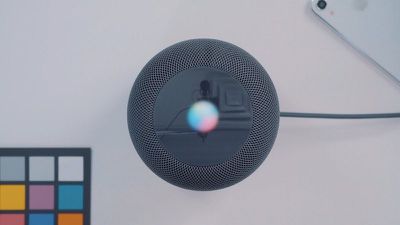 The change appears to be very subtle. MacRumors readers described the Australian Female and British Male voices as "more natural" and "much clearer," and similar reports have emerged about other voices. Although there are many different descriptions for each voice, the consensus appears to be that the tweaks make ‌Siri‌ sound more human-like.

HomePod users can choose any ‌Siri‌ voice no matter the region they are located in, but as of now the vast majority of these reports appear to be located in the same regions as the voice they represent. This may be the beginning of a wider rollout, but that's still unclear at this point.

Twitter user @callumjcoe recorded the difference between the current iteration of the Australian Female voice (on an iPad) and the updated voice (on HomePod). Of course, distortion and muddled sound quality from a recording don't provide a perfect example, but there is a slight change between the two heard in the video, which is likely much more pronounced in person.

So will the real #Siri please stand up. pic.twitter.com/8a8LCyarqI — Callum (@callumjcoe) February 13, 2019

As of writing, MacRumors hasn't noticed any similar updates to ‌Siri‌ on HomePod (for any voices) in the United States. Apple has updated ‌Siri‌ over the past year with improvements to the assistant's ability to recognize local businesses and destinations, as well as new jokes, but many Apple users remain frustrated with the technology. One of the last major updates to ‌Siri‌ came in iOS 11 in 2017, when Apple gave ‌Siri‌ a more natural voice that had better pronunciation and different inflection depending on what's being said.

In early 2018, ‌Siri‌ creator, co-founder, and former board member Norman Winarsky talked about the origins of Siri and the company's intentions for the assistant before Apple acquired it. According to the co-founder, ‌Siri‌ was originally meant to be incredibly intelligent in just a few key areas -- travel and entertainment -- and then "gradually extend to related areas" once it mastered each. Apple's acquisition pivoted ‌Siri‌ to an all-encompassing life assistant, and Winarsky said that this decision has likely led Apple to search "for a level of perfection they can't get."

Although unconfirmed, the new voice changes to ‌Siri‌ may be Apple's latest attempt to make the voice assistant more personable and easy to talk to, in the wake of ongoing user complaints. If the changes roll out to other regions, we'll update this article.

(Thanks Sebastian, Robert, and Jared!)

zarmanto
That's all well and good... but it boggles my mind that seemingly simple directions yield the proverbial, "I can't do that, Dave." response from Siri, on my iPhone.

* Hey Siri, lock my iPhone. (When you notice that someone has your iPhone and is rifling through your personal stuff without permission, for instance.)
* Hey Siri, turn off my iPhone. ("No Siri... I don't need directions on how to turn off my iPhone; I wanted you to do it.")
* Hey Siri, read this webpage to me. (When your eyes are otherwise occupied by something more important, such as driving.)
* Hey Siri, open google.com in Chrome. ("No Siri... that's Safari. I said Chrome." Same issue with Firefox, obviously.)
* Hey Siri, open Notes and take dictation for me. (All of the necessary sub-components are right there waiting to be invoked... it's basically just the front door itself that's closed! Am I the only person who wants to do this -- and not pay Dragon's hefty price for the privilege?)
* Hey Siri, do any damned thing period when I'm off the grid. (Yeah... apparently that's just never going to happen, because Siri lives entirely in the cloud.)

"All-encompassing life assistant"? Yeah... not so much.
Score: 5 Votes (Like | Disagree)

jonnyb098
I'd love for them to fix whatever bug it is causing Siri to say "just a sec" and pause for 10-20 seconds every time I ask to play music. All other voice commands work instantly.
Score: 4 Votes (Like | Disagree)

nitramluap
The reason you haven’t noticed any changes to the US version of Siri is because they ALREADY made Siri’s voice more natural for that accent - about a year ago!

The other English Siri versions were left unchanged, sounding more robotic with limited inflexions. It’s the single reason I use the US Siri voice and not the Australian voice. When they update the Siri voice on iOS devices for the more natural Australian voice, I’ll change it. The US Siri voice is a little too ‘chirpy Californian bimbo’ for me, despite it sounding realistic.
Score: 4 Votes (Like | Disagree)

G5isAlive
Well it can only get better right? But I don't think more natural sounding voices were on the top of anyone's wish list.
Score: 3 Votes (Like | Disagree)

shaunp
Is it now going to do a Geordie or a Scouse accent? That would be ace.
Score: 3 Votes (Like | Disagree)
Read All Comments