Apple is planning to launch its rumored streaming television service in April or May, but some cable content providers won't be participating, reports CNBC.

Recent rumors have suggested that along with Apple's own original content, which will be provided to Apple users for free, the service will allow Apple customers to subscribe to additional add-on subscription services on top of Apple's own offering. Customers will be able to sign up for existing digital services like Showtime and watch that content within the TV app, so long as those services are partnered with Apple. 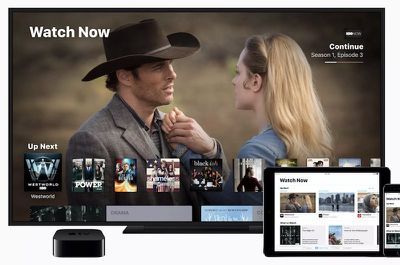 According to CNBC, as Apple prepares to launch the service, some content providers are still not on board. HBO may not be participating because of disagreements over data sharing and revenue splits, for example, and Hulu and Netflix are not expected to participate.

Starz, Showtime, and Viacom are all expected to offer subscription streaming services through Apple's platform, though, and HBO may also join up if the disagreements can be settled.

Apple is requesting a 30 percent cut on every subscription that originates from its TV service, higher than the 15 percent cut that Apple takes when customers sign up for services like Netflix through the App Store.

The April or May target launch date is in line with past details from The Information, which suggested Apple was telling content partners to be prepared for a launch by mid-April.

Apple has more than two dozen original television shows and movies in the works for its streaming service, which rumors have suggested will be available in more than 100 countries by the end of the year.

AngerDanger
Whenever that article image is reused, I wonder what those characters are talking about…

I agree, I hate subscriptions, but I suspect that we are the minority.

Apple believes that subscriptions are the answer to less dependence on hardware and bringing more people into the ecosystem to even out revenues.
Score: 7 Votes (Like | Disagree)

It's not like subscriptions are some new concept. Cable TV has been around for decades.

It's contracts that people don't like. I'm fine with subscribing to tons of things as long as I can give that service the finger any time I'm displeased.
Score: 7 Votes (Like | Disagree)

mtneer
Interesting that Apple wants a 30% cut from the ecosystem - which already has or is moving towards a well established distribution systems : widely available on Apple and non-Apple ecosystems. So what is Apple’s angle in demanding this higher cut? Are they planning to block content creator apps and Safari from accessing their own independent competing subscription services?
Score: 6 Votes (Like | Disagree)