Apple Once Again the Most Valuable Public Company in the World

Apple has once again reclaimed the title of most valuable publicly traded company marking the first time the Cupertino company has held that title since December.

As noted by CNBC, Apple surpassed Microsoft and Amazon this afternoon with a closing price of $174.24, for a market capitalization of $821.59 billion. 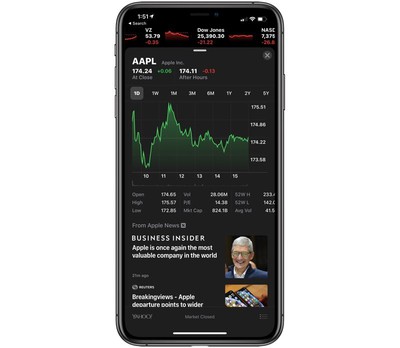 Apple saw a significant drop in market value in January after lowering its revenue guidance for the first fiscal quarter of 2019 to $84 billion, down from $89 to $93 billion.

Apple's stock has recovered somewhat since its earnings release on January 29 where it reported revenue of $84.31 billion and net quarterly profit of $19.965 billion, or $4.18 per diluted share.

It was Apple's second best quarter ever in terms of revenue and profit, despite the fact that it ultimately ended up being lower than expected due to flagging iPhone sales.

az431
This can’t be true. The people who post here assured us that Tim Cook’s greed guaranteed Apple’s collapse, and that this was the beginning.
[doublepost=1549490747][/doublepost]

Why should [s]we[/s] I care? I care everything they
have created recently has issues and they
want more money for it.

I must own different “everything they have created lately” devices than you because none of them have any issues.
Score: 24 Votes (Like | Disagree)

StellarVixen
Doom, so much doom, other companies would give everything to be doomed like this...
Score: 20 Votes (Like | Disagree)

snowboarder
Why should we care? I care everything they
have created recently has issues and they
want more money for it.
Score: 17 Votes (Like | Disagree)

Zaft
Oh boy, I’m sure the macrumors users are excited bout this.....
Score: 14 Votes (Like | Disagree)

s15119
But, wait. That can't be. Apple is failing, Tim is a dummy that doesn't know how to run a company. They make shoddy products and the pricces prices are insane. Apple will go out of business any day now. Oh wait, that's just stupid comments from MR. I guess the real world is a lot different than that :-)
Score: 12 Votes (Like | Disagree)
Read All Comments