Apple's "Wearables, Home, and Accessories" category, which used to be called the "Other" category, has surpassed the iPad in revenue and is closing in on the Mac lineup as well. 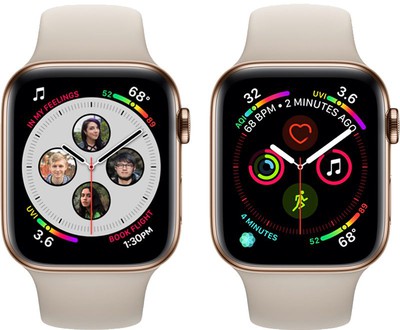 Apple Watch, HomePod, Apple TV, AirPods, Beats products, iPod touch, and Apple-branded and third-party accessories are included in the category, but it's Apple's wearables that have been driving growth.

The wearables category has been setting regular quarterly revenue records thanks to the strength of ‌Apple Watch‌ sales. In Q4 2018, for example, Apple saw wearables growth over 50 percent, and we're likely to hear more about wearables during today's earnings call.

As Asymco's Horace Dediu pointed out at the beginning of January, the ‌Apple Watch‌ is also now a "decidedly bigger business" than Apple's iPod ever was, based on historical revenue records and estimated ‌Apple Watch‌ sales.

Apple does not break down ‌Apple Watch‌ sales individually, lumping the data in with sales of other products in the Wearables, Home, and Accessories category, but the company does often give hints on how well the ‌Apple Watch‌ is selling.

With iPhone sales stagnating somewhat, Apple will be increasingly relying on revenue from its wearables category to drive growth. The company will also be looking to its services category, which has been bringing in more revenue than the ‌iPad‌ and the Mac categories for quite some time now.

TMRJIJ
It's kinda funny how MR members claimed half of these products were going to fail.
Apple - 1, MacRumors Forums - 0
Score: 14 Votes (Like | Disagree)

It's kinda funny how MR members claimed half of these products were going to fail.
Apple - 1, MacRumors Forums - 0

This is nothing new. Trash talk has been going back since forever, though it’s probably more toxic now. This same MR forum claimed the first iPod would fail. :rolleyes:
Score: 11 Votes (Like | Disagree)

timber
Whatever one may think of Tim Cook it seems he is delivering the next Apple big business.
And the watch is yet to be set free from the iPhone.
Score: 7 Votes (Like | Disagree)

macduke
Makes sense. Apple Watch Series 4 is excellent and there is a lot of room for growth. AirPods have also been a great innovation.
Score: 6 Votes (Like | Disagree)

djcerla
The flop that wasn't.
Score: 3 Votes (Like | Disagree)

This is nothing new. Trash talk has been going back since forever, though it’s probably more toxic now. This same MR forum claimed the first iPod would fail. :rolleyes:

By my count Apple have a lot more points than that :p

I was trying to be generous in my rounding.
Actual Calculations:
Apple - Over 9000 :D, MR Forums - Syntax Error :mad:
Score: 3 Votes (Like | Disagree)
Read All Comments

Tuesday July 7, 2020 11:38 am PDT by Juli Clover
Apple today released the second beta of iOS 14 to developers for testing purposes, tweaking and refining some of the features that are coming in the update. Below, we've rounded up all of the changes that we found in the second beta. - Calendar icon - There's a new Calendar app icon in iOS 14 beta 2, with the day of the week abbreviated rather than spelled out. - Clock icon - The clock...
Read Full Article • 109 comments

Friday July 3, 2020 10:13 am PDT by Eric Slivka
Amid multiple reports that Apple will no longer include a power adapter in its iPhone boxes starting with the iPhone 12 later this year, it appears Apple is surveying recent iPhone buyers to ask about what they've done with the power adapters that came with their previous iPhones. Screenshot via Twitter user @bedabb_ Apple's surveys typically cover numerous aspects of its products, but...
Read Full Article • 347 comments

Tuesday July 7, 2020 4:00 am PDT by Tim Hardwick
macOS 11 Big Sur is the next major release of Apple's operating system for Mac, and following its preview at WWDC, one of the biggest discussions has revolved around the all-new user interface redesign. Developers are still learning what the impact the new UI will have on their apps, and with that in mind, app designer Andrew Denty has compiled an extensive visual comparison of the user...
Read Full Article • 141 comments

Saturday July 4, 2020 6:00 am PDT by MacRumors Staff
With WWDC now behind us, our attention this week largely turned back to rumors, led by increasing claims that Apple controversially won't be including a power adapter in the box with the iPhone 12. We also saw a few other iPhone 12 rumors, signs of an upcoming iMac update, and some more information on timing of updates for Apple's smaller iPads. The other big topic this week was Apple's...
Read Full Article • 38 comments

Tuesday July 7, 2020 6:40 am PDT by Mitchel Broussard
Logitech today announced a new mouse and keyboard built for Macs, called the Logitech MX Master 3 and Logitech MX Keys for Mac. These new accessories are updates that have been optimized specifically for Apple's MacBook and iMac computers. The Logitech MX Keys for Mac ($99.99) supports a tactile keyboard with smart backlighting that automatically adjusts to ambient lighting conditions. It...
Read Full Article • 106 comments