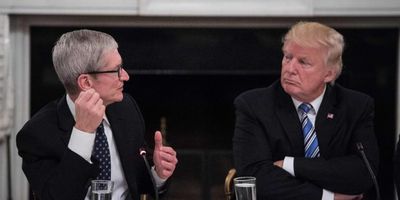 Apple's lobbying expenses have increased significantly since the Trump administration assumed office two years ago, with the iPhone maker spending more than ever before to influence the current government on issues such as privacy, education, climate change, trade, immigration, tax reform, and patent reform.

The largest amount Apple ever spent on lobbying Obama's administration in a single year was $4.6 million in 2016, his last year in office.

Apple also lobbied the government on the development of autonomous vehicle technologies, regulation of mobile medical applications, and distribution of video programming, hinting at some of the company's upcoming products and services, such as its widely expected streaming TV service later this year.

Apple CEO Tim Cook has maintained a civil relationship with Trump, but he has disagreed with some of the President's policies and actions as it relates to immigration, trade agreements with China, and beyond.

I see what they’re doing it, but it’s sickening they spend any money on this administration.

This administration is doing a great job. Unemployment rate is at a record low, especially for African Americans and hispanics. But go on, keep yelling ORANGE MAN BAD
Score: 68 Votes (Like | Disagree)

now i see it
"Lobbying" is just a polite word for bribing to make it sound legit. But that's what it is. That's how govt in the USA work$.
Score: 31 Votes (Like | Disagree)

This administration is doing a great job. Unemployment rate is at a record low, especially for African Americans and hispanics. But go on, keep yelling ORANGE MAN BAD

Shh! They don't want that factual information! Get it out of here! :P
Score: 26 Votes (Like | Disagree)

I see what they’re doing it, but it’s sickening they spend any money on this administration.

You realize that spending money with lobbying firms isn't the same as handing Trump a check, right? Not that I'm a big fan of lobbyists enriching themselves but you seem to be conflating the two concepts.
Score: 24 Votes (Like | Disagree)

Saturday February 4, 2023 10:05 am PST by Eric Slivka
Online retailer TigerDirect has slashed pricing on the M1 iPad Air in several colors, offering the base 64GB configuration for just $313.99 in Purple and Pink. Note: MacRumors is an affiliate partner with TigerDirect. When you click a link and make a purchase, we may receive a small payment, which helps us keep the site running. That's a savings of 48% compared to Apple's normal $599.00...
Read Full Article • 472 comments

Saturday February 4, 2023 1:30 am PST by Hartley Charlton
Google's Chromium developers are working on an experimental web browser for iOS that would break Apple's browser engine restrictions, The Register reports. The experimental browser, which is being actively pursued by developers, uses Google's Blink engine. Yet if Google attempted to release it on the App Store, it would not pass Apple's App Review process. Apple's App Store rules dictate...
Read Full Article • 270 comments