UC San Diego Health recently sent an online survey to its first 425 patients who activated Apple Health Records in 2018, and among 132 respondents, 78 percent indicated that they were "satisfied with using the feature." 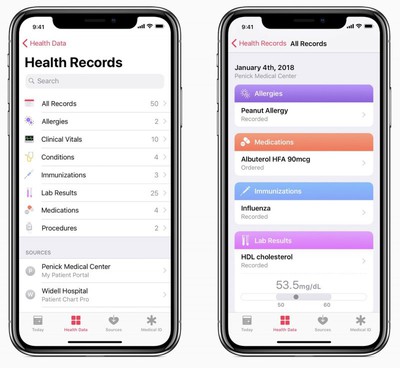 96 percent of respondents said they could "easily connect their mobile devices to the platform," and 90 percent said the "smartphone solution improved their understanding of their own health, facilitated conversations with their clinicians, or improved sharing of personal health information with friends and family."

The survey results were published in the Journal of the American Medical Association this week by doctors at UC San Diego Health, one of the first hospitals and clinics to make Apple Health Records available to its patients.

Apple introduced the Health Records feature in iOS 11.3 in March 2018, allowing patients to view their medical records from multiple participating hospitals and clinics directly in the Health app on the iPhone, including allergies, vital signs, conditions, immunizations, lab results, medications, and procedures.

The journal submission cautions that, as with many new products and solutions, such enthusiasm is common from early adopters. The platform will need to "prove that it is useful, sustainable, scalable, and actually improves health outcomes," according to Christian Dameff, MD, UC San Diego Health.

As noted by CNBC's Christina Farr, hospitals have historically faced "major challenges" with getting patients to use electronic medical records because the technology "tends to be poorly designed and hard to use."

UC San Diego Health doctors believe three key developments may contribute to the success of Apple Health Records compared to earlier efforts like Google Health in 2008, including the ubiquity of mobile technology, the maturation of health data communications standards, and the widespread use of App Stores.

More than 100 institutions now support Apple Health Records in the United States, including Cedars-Sinai in Los Angeles and Johns Hopkins in Baltimore, and Apple reportedly hopes to add the U.S. Department of Veterans Affairs as a partner as well, a move that would provide veterans with access to the feature.

Health records are stored in the Health Data tab of the Health app on iOS 11.3 and later.

jimthing
Get back to us when public institutions like the NHS here in the UK support it, where virtually every citizen has a record (all 65m of us).
Then it'll be worth patting themselves on the back. Not this.
Score: 7 Votes (Like | Disagree)

koruki
lol wow look at all the whining comments already, they need to make a start somewhere guys. Rome wasn't built in a day
Score: 6 Votes (Like | Disagree)

OverSpun
I only recently activated this feature but I think it works great. It is a lot more convenient than flipping through prints of medical labs.
Score: 5 Votes (Like | Disagree)

PsykX
Below 90-95% of satisfaction will make it really hard to adopt in public hospitals IMO.
But we really, like really really have to use these technologies sooner than later, or the system will continue to crumble (in Quebec at least)
Score: 4 Votes (Like | Disagree)

Get back to us when public institutions like the NHS here in the UK support it, where virtually every citizen has a record (all 65m of us).
Then it'll be worth patting themselves on the back. Not this.

I think I missed who patted themselves on the back.
Score: 4 Votes (Like | Disagree)

Thursday May 13, 2021 12:10 am PDT by Sami Fathi
Apple has fired Antonio García Martínez, an ex-Facebook product manager and author of the controversial book "Chaos Monkeys," following public and internal calls for removal and investigation due to past misogynistic statements, The Verge reports. Apple hired Martínez earlier this week to join its ads team, however, comments that Martínez made in the past sparked condemnation from users...
Read Full Article • 276 comments

Wednesday May 12, 2021 10:03 am PDT by Juli Clover
Apple's M1 iMacs are set to start delivering to customers next week, and ahead of the official launch day, benchmarks for the machines have been showing up on Geekbench, likely from reviewers who are testing them. It will come as no surprise that M1 iMac benchmarks are right on par with benchmarks for the M1 MacBook Pro, MacBook Air, and Mac mini, coming in with an average single-core score...
Read Full Article • 253 comments

Wednesday May 12, 2021 3:54 pm PDT by Juli Clover
In the ongoing legal battle between Apple and Epic Games, the two companies are this week calling up their expert witnesses to argue their points before Judge Yvonne Gonzalez Rogers, who will make a decision in the case after a three week trial. Expert testimony is not as exciting as some of the leaked App Store documents that were highlighted last week, especially as much of what's being...
Read Full Article • 239 comments

Wednesday May 12, 2021 8:44 am PDT by Sami Fathi
An Apple customer in the United Kingdom has successfully used Apple's Find My network to track an AirTag as it was being sent by mail to a friend in a completely different city. Outlined in a blog post at Intego, Kirk McElhearn said he taped an AirTag to a piece of card, wrapped it inside a small bubble envelope, and then sent it on its way. Kirk lives in the small town of...
Read Full Article • 149 comments