Apple's efforts to modernize its chain of over 500 retail stores around the world may extend to Canada soon.

Apple plans to relocate its oft-crowded store at the Eaton Centre shopping mall in Downtown Toronto to a much larger space in the mall that is currently occupied by apparel chain Abercrombie & Fitch, which will also be relocating within the mall as part of the shuffle, according to people familiar with the matter. 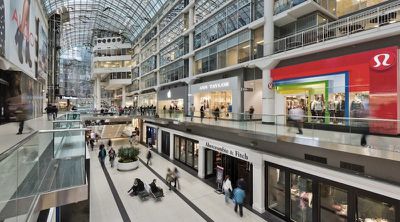 Apple is currently located on the third floor of the Eaton Centre, while the existing Abercrombie & Fitch is situated almost directly beneath Apple on the second floor near the Queen Street entrance to the mall. Apple's mall-based stores are frequently in prime locations near entrances and escalators.

The biggest reason for Apple's planned move would be additional space. Abercrombie & Fitch has a 10,680-square-foot unit, more than twice the size of Apple's current 4,977-square-foot unit, according to an Eaton Centre floor plan.

Eaton Centre is North America's busiest shopping mall, with more than 50 million people passing through its atrium in 2017 according to one study. It is also home to Apple's only store in Downtown Toronto. An expansion would surely be a sigh of relief for not only customers but the team staffing the busy store.

Apple's current store at the Eaton Centre
Apple has greatly expanded both its product lineup and retail initiatives since the store first opened in 2006, one year prior to the iPhone. The additional space would better accomodate customers in many ways, ranging from Apple Watch try-ons to Today at Apple sessions to Genius Bar appointments.

Apple did not respond to a request for comment. Eaton Centre owner and management company Cadillac Fairview declined to comment.

Another move that could help with the traffic at Apple Eaton Centre is Apple's rumored flagship store at the ground level of The One, a super-tall 85-floor condominium under construction at the corner of Yonge Street and Bloor Street, one of the busiest intersections in Toronto and bordering the downtown core.

A render of The One upon completion
Early last year, Toronto-based photographer, writer, and urban planning aficionado Pedro Marques uncovered a reference to Apple in a planning document for the condominium. The architecture firm behind the project is Foster + Partners, which has partnered with Apple on many retail stores and its Apple Park headquarters.

Marques has now tipped MacRumors to another reference to Apple in a brochure for an adjacent condominium project at 19 Bloor Street West.

The brochure claims that The One will be "the future home of Apple," with the longest side of the store opening to Bloor Street's upscale shopping area Mink Mile. Excavation is underway for construction of the condominium, expected to be completed by late 2022, but its retail space may open as early as 2020.

The southwest corner of Yonge and Bloor is the former site of men's clothing store Stollery's, which closed in early 2015 after 114 years in business.

Apple has four existing stores in Toronto at Yorkdale, Sherway Gardens, Fairview, and the aforementioned Eaton Centre, but all of them are within shopping malls. The One would finally provide Toronto with a long-desired street-facing Apple Store.

Updated: These plans have now been confirmed by a City of Toronto building permit application.

ipedro
Cadillac Fairview is embarking on a massive shuffle at Eaton Centre, assembling a large number of stores around and below the current Apple Store.

Apple is moving to the Abercrombie space which will be expanded to include the corner where Scotch & Soda and Baby Gap are moving out of.

Directly above is the existing Apple Store. With Lulu Lemon moving out, that sits on the edge of Abercrombie below. Just Ann Taylor stands in the way of a potential 2 story Apple Store.

I have more info. Continuing to investigate.
Score: 7 Votes (Like | Disagree)

AngerDanger
Well, if Samsung wants to relocate their store, I guess there's going to be space available. ;)

HiVolt
Wow, about freakin time. The Eaton Center store is a freakin sardine can.

I still wish they would open one in Scarborough Town Centre. Though an Apple Reseller has opened up there, Jump+.

But their return policy blows. Final sale on all Apple products that are opened. I'm not sure if that's even legal in Canada.

I think New York does this, too. They setup a temporary rink during the winter in front of Radio City Music Hall or whatever they call it.

That's Rockefeller Center. It's a beautiful and absolutely iconic rink, I've been there and seen it.

We've got a similar rink in front of City Hall, right by the Eaton Centre. It even caught the eye of Japanese animators. 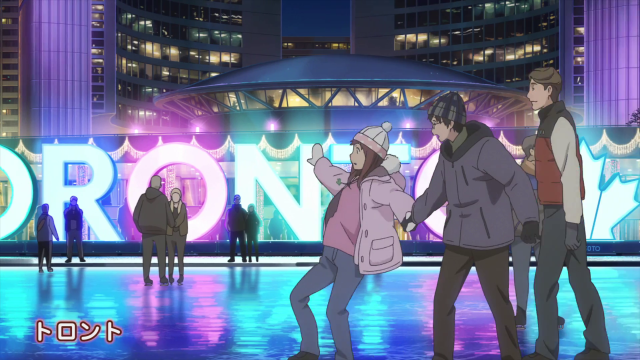 Existing Apple Store is too small, so expansion would be great.

Makes sense to keep the Eaton Centre store, rather than move it to Yonge / Bloor since Eaton Centre is #1 visited location in GTA ( aside from transportation hubs - Pearson etc )

They’re getting both. Eaton Centre was never going to move. It was always about adding a store in the upscale Yorkville shopping neighbourhood.

Apple can easily support even a third Apple Store. There are rumours of one being negotiated for The Well development near King West.
Score: 3 Votes (Like | Disagree)
Read All Comments