Canada's most populous city may eventually be home to a flagship Apple retail store at one of its busiest intersections. 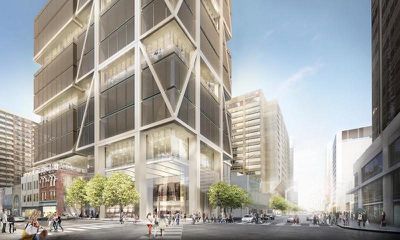 A render of what The One will look like upon completion
MacRumors has learned that Apple has been labeled in a planning document for The One, a massive 85-floor condominium under construction at the corner of Yonge Street and Bloor Street in Toronto. The architecture firm behind the project, Foster + Partners, has partnered with Apple on numerous occasions.

The One's architectural plan
The plans outline a proposed triple-height, 9,000-plus-square-foot retail store with space for a riser to the ceiling, suggesting the store could have a cantilevered balcony like Apple's flagship Union Square location in San Francisco. The store's large glass entrance would open up to the sidewalk facing Bloor Street.

Apple Union Square in San Francisco
While the blueprints were submitted to the City of Toronto in March 2016, eagle-eyed MacRumors reader and Toronto resident Pedro Marques noticed the document has been updated, and it appears Apple was labeled at a later date.

Apple has yet to announce any plans to open a flagship store in Toronto, but rumors about the company setting up shop at Yonge and Bloor date back to at least 2012. The planning document is the first concrete evidence we've seen beyond subtle hints from builder Mizrahi Developments.

Apple would be one of several retailers at the base of the condominium, and the store could also have an entrance in Toronto's PATH, a series of underground hallways that connect downtown offices, stores, and subway stations.

Despite being mentioned in the planning document, there is no guarantee that Apple has finalized a lease to occupy The One. A few years ago, an anonymous tipster informed MacRumors that Apple was considering pulling out of the project given delays, pushback from some local residents, and other issues.

Toronto has four existing Apple retail stores at Eaton Centre, Fairview Mall, Sherway Gardens, and Yorkdale, but all of them are within shopping malls, and only one is located in the downtown core.

A large, street-facing Apple store has been long desired in Toronto, and within two to four years, it may finally be a reality. The One is expected to be finished by early 2020, although Foster + Partners still lists a 2022 completion date.

ipedro
The Eaton Centre Store has become an embarrassment for Apple. It was built at a time when the iPod was Apple’s most popular product and Macs were used by fewer than 10% of people. It wasn’t built for a ubiquitous Apple, specially in a booming city the size of Toronto. It’s about time Toronto gets a proper flagship.
Score: 10 Votes (Like | Disagree)

Does Apple really need to continue to open these ridiculously extravagant stores in expensive locations? I mean I understand keeping up an image; but at this point, who doesn't know Apple's image in the civilized world?

AFAIK these so called "ridiculously extravagant stores in expensive locations" bring in the most cash, they bring in much more money than they cost.
Score: 5 Votes (Like | Disagree)

The Eaton Centre Store has become an embarrassment for Apple. It was built at a time when the iPod was Apple’s most popular product and Macs were used by fewer than 10% of people. It wasn’t built for a ubiquitous Apple, specially in a booming city the size of Toronto. It’s about time Toronto gets a proper flagship.

Yes the Eaton Centre one is a disgrace, bloody tiny serving the entire downtown and east.

Fine open up another one downtown, but why haven't they opened up one in the east end, in the Scarborough Town Centre?

SCT has renovated and improved its image quite a bit from the run down dump it was just 5 years ago.
Score: 4 Votes (Like | Disagree)

I wish Apple would build a proper stand alone flagship in Toronto, not one in the base of a tower.

I’ve considered Where they could build one downtown and we’re really short on space. It would have to be in a privately owned plaza like Apple Fifth Avenue. TD Centre provides a good space for that. Or they could build it on the waterfront like Chicago’s new waterfront store. But unlike Chicago, our waterfront is still very low density and is pretty much dead in the winter.

For retail prime real estate, it literally does not get better than Yonge and Bloor. On top of where 2 subways intersect, at both of Toronto’s most popular streets, and in Yorkville, the high end retail district. I think it’s the perfect spot.
Score: 4 Votes (Like | Disagree)

rpat701
Does Apple really need to continue to open these ridiculously extravagant stores in expensive locations? I mean I understand keeping up an image; but at this point, who doesn't know Apple's image in the civilized world?
Score: 2 Votes (Like | Disagree)

Does Apple really need to continue to open these ridiculously extravagant stores in expensive locations? I mean I understand keeping up an image; but at this point, who doesn't know Apple's image in the civilized world?

As long as Apple generates more retail revenue per square foot than anybody else in the world, the answer to your question is a resounding YES.
Score: 2 Votes (Like | Disagree)
Read All Comments