The busiest shopping mall in North America for the past several years will finally be getting a brand new Apple Store in the not too distant future. 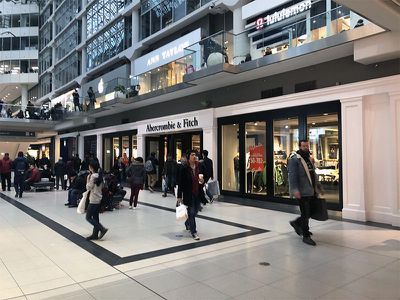 Apple's new store will take over this Abercrombie & Fitch location via Pedro Marques
A new building permit for the Eaton Centre shopping mall in Toronto, Canada was applied for three days ago, proposing interior alterations to unit 2105A. The space is currently occupied by apparel retailer Abercrombie & Fitch, which will be relocating to a new store directly across the hall in spring 2019.

When finished, the unit will be a new "ground floor Apple Store," according to the building permit. Abercrombie & Fitch is currently located on "Level 2" of the Eaton Centre near the south Queen Street entrance to the mall. Apple will "move" its existing store into the space, the application confirms.

MacRumors was first to report on Apple's plans at the Eaton Centre last week based on info from people familiar with the matter.

The biggest benefit of Apple's planned move will be additional space. Abercrombie & Fitch currently has a 10,680-square-foot unit, more than twice the size of Apple's current 4,977-square-foot store, according to an Eaton Centre floor plan.

Not only is the Eaton Centre the busiest shopping mall in North America, but it is home to Apple's only store in Downtown Toronto. An expansion would be a sigh of relief for not only customers but the team staffing the busy store, as the location has developed a reputation for being frequently overcrowded.

Apple's current store at the Eaton Centre
Toronto-based photographer and urban planning aficionado Pedro Marques has informed MacRumors that two stores next to Abercrombie & Fitch will soon be vacating, including Scotch & Soda and Baby Gap, potentially giving Apple up to 15,000 square feet of space for its new store — triple the size of its current store.

Depending on how long the City of Toronto's zoning and safety reviews take, the new store could potentially open in time for the 2019 holiday shopping season. However, no timeframe has been specified as of yet.

Apple and the Eaton Centre's owner and property management company Cadillac Fairview did not immediately respond to requests for comment.

Apple has four existing stores in Toronto at Yorkdale, Sherway Gardens, Fairview, and the aforementioned Eaton Centre, but all of them are within shopping malls. Rumors suggest Apple also plans to open a new street-facing store at The One, an upcoming condominium bordering Downtown Toronto slated to open by 2022.

This is welcome news. Almost every time I've gone in there, it's been a real battle trying to get what I wanted and get out. To say it's packed all the time is an understatement. And by "all the time" I don't mean just in the evenings or weekends. Try going in there in the middle of a work day, and you'll find it's the same.

This is long overdue.

Right. Some people don’t understand or think that we’re exagerrating. Right now, on a random Monday, after the holiday season, with no sales going on and not at lunch time, the store is completely slammed.

For perspective, Toronto is the largest city in Canada, the 4th largest city in North America — bigger than Chicago, bigger than San Francisco — and it has a single 4000sq/ft Apple Store at the busiest mall on the continent to service all of its downtown. It’s insane that they’ve left this go on so long.

The new store will be at least double the size and will be joined by a second downtown flagship in a little over a year at Yonge & Bloor. A third one is being negotiated at The Well, near the popular King West neighbourhood.

Pretty sure opening new stores is the last thing you should be doing right now, Tim.

Pretty sure stores open and expand based on demand. You should see the existing store. It’s constantly slammed.
Score: 10 Votes (Like | Disagree)

You heard it here, folks. Apple Stores are completely empty. No one's bought an Apple product since January 2nd.
Score: 5 Votes (Like | Disagree)

wolfshades
This is welcome news. Almost every time I've gone in there, it's been a real battle trying to get what I wanted and get out. To say it's packed all the time is an understatement. And by "all the time" I don't mean just in the evenings or weekends. Try going in there in the middle of a work day, and you'll find it's the same.

The new Apple Store at Yonge and Bloor will have 2 floors with a blueprint for the building indicating a cantilevered floor like San Francisco’s.

^ That's going to be absolutely beautiful!!

This is welcome news. Almost every time I've gone in there, it's been a real battle trying to get what I wanted and get out. To say it's packed all the time is an understatement. And by "all the time" I don't mean just in the evenings or weekends. Try going in there in the middle of a work day, and you'll find it's the same.

This is long overdue.

Agreed. This Eaton Centre Apple Store is packed from 9:15AM EST until roughly 9:55PM EST (5 mins before close M-F, Saturday and Sunday all day e'er day!! To be honest this store is probably THE most secure Apple Store in N.America. Should a thief even be dumb enough to attempt to steal anything (even right at the front) the crowd alone even unbeknownst to them would stop the thief from even going faster than a turtle.

The very LAST time I've seen any decent body personal space in that store was back in 2011 when I purchased a 13" MBA Core i7 and I came into the store at 9:55PM just prior to closing.
Score: 3 Votes (Like | Disagree)

TheHotdog
Pretty sure opening new stores is the last thing you should be doing right now, Tim.
Score: 2 Votes (Like | Disagree)
Read All Comments