The new iLX-W650 receiver features a seven-inch anti-glare capacitive touchscreen with a shallow chassis that measures 2.4-inches deep, allowing for the system to fit into vehicles that do not have a lot of depth behind the dashboard. The receiver has a so-called mech-less design with no CD/DVD slot. 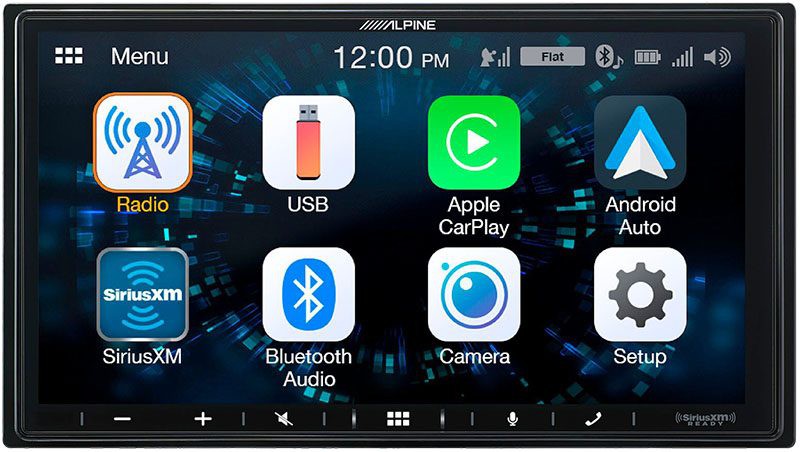 iLX-W650
The iLX-W650 also features an amp-stacking capability that enables Alpine's new KTA-450 amplifier to fit in the open space behind the receiver using an included bracket. The combined depth of the iLX-W650, KTA-450, and mounting bracket equals less than the depth of a standard double-DIN chassis.

The iLX-W650 in tandem with the KTA-450 amplifier won a CES 2019 Innovation Award in the In-Vehicle Audio/Video category.

Alpine also added a second model to its Halo9 product lineup. Like last year's iLX-F309, the new iLX-F259 receiver features a nine-inch capacitive touchscreen that "hovers" over the dashboard, allowing the oversize screen to be added to a variety of vehicles without the need for custom installation.

The screen is attached to an adjustable mount that is connected to a traditional single-DIN chassis. It can be tilted at four pre-set angle points to better match the tilt and height of the dashboard and can be positioned up to 20mm deeper and up to 30mm lower than the default position during installation.

Other features of the iLX-F259 include a mech-less design with no CD/DVD slot, standard Bluetooth music playback, SiriusXM readiness, and one rear-view camera input with the option to add additional camera inputs sold separately.

The iLX-W650 and iLX-F259 will be available in March for suggested prices of $500 and $800 USD respectively at authorized Alpine retailers.

It's like staring at the early Android phones that had a dozen physical buttons. Crazy to think that Android manufacturers figured it out 10 years ago but everyone in the auto industry that isn't Tesla can't figure that out.

Considering automobile electronics have a less than sterling reputation for reliability, physical back ups are still good to have. They are especially nice for the OCD no fingerprint crowd.
Score: 3 Votes (Like | Disagree)

hortod1
I just wish more aftermarket manufacturers would have a physical volume knob instead of the buttons. I have a Pioneer with CarPlay unit in one of my cars and the buttons are small enough you have to take your eyes off the road to find them. A knob solves that problem. Didn’t realize how big of a deal it was (to me) until after I got it installed and started using it.
Score: 3 Votes (Like | Disagree)

I just wish more aftermarket manufacturers would have a physical volume knob instead of the buttons. I have a Pioneer with CarPlay unit in one of my cars and the buttons are small enough you have to take your eyes off the road to find them. A knob solves that problem. Didn’t realize how big of a deal it was (to me) until after I got it installed and started using it.

totally agree. and you are in luck... the Sony XAV-AX1000 has a knob, is $330 and works flawlessly. I even got Best Buy install it in my car (for free) and price match Amazon where it (or its predecessor) can be found for sub-$300
Score: 2 Votes (Like | Disagree)

Relatively speaking, in dash AV units have come down in price quite a bit over the years. They’re also much more feature packed now. People spend $1000 a year on a new phone yet $500-$800 for an in dash receiver that you’ll buy once is too much?
Factor in the fact that more and more Americans are in their cars for longer periods of time than ever before and it makes this even more appealing.

Not really the same thing in my my opinion. In my case, my car has Bluetooth in the stock receiver and the CD player and radio and XM all still work fine so I really don’t need a new head unit. I want a new head unit, that’s a little different from a phone that I finance through my mobile carrier.
Score: 2 Votes (Like | Disagree)

It's like staring at the early Android phones that had a dozen physical buttons. Crazy to think that Android manufacturers figured it out 10 years ago but everyone in the auto industry that isn't Tesla can't figure that out.

Removing physical buttons is a negative to me. The tactile feedback of physical knobs and buttons allows one to keep their eyes on the road when adjusting the volume, changing a station, or any other number of things.
Score: 2 Votes (Like | Disagree)

Spock
Wish the prices on these things would start coming down, I would like to upgrade the head unit in my car but I would have to buy the head unit and a $160 adapter to keep my steering wheel controls and factory amp and subwoofer.
Score: 2 Votes (Like | Disagree)
Read All Comments

Tuesday May 26, 2020 2:31 am PDT by Tim Hardwick
Apple will use a Lightning port instead of USB-C in the upcoming "iPhone 12," but it will be the last major series of Apple's flagship phones to do so, with models set to combine wireless charging and a port-less Smart Connector system for data transfer and syncing in the iPhone "13 series" next year. The above claim comes from occasional Apple leaker and Twitter user "Fudge" (@choco_bit),...
Read Full Article • 319 comments

Tuesday May 26, 2020 5:30 am PDT by Joe Rossignol
Apple plans to release several higher-end devices with Mini-LED displays in 2021, including a new 12.9-inch iPad Pro in the first quarter, a new 16-inch MacBook Pro in the second quarter, and a new 27-inch iMac in the second half of the year, according to Jeff Pu, an analyst at Chinese research firm GF Securities. This timeframe lines up with one shared by analyst Ming-Chi Kuo, who recently...
Read Full Article • 74 comments

Monday May 25, 2020 2:53 am PDT by Tim Hardwick
Apple is reportedly looking to integrate light sensors in a new model of AirPods in the next couple of years, according to a new report today, suggesting their use could be part of rumored upcoming health monitoring features in the true wireless earbuds. In a paywalled article, DigiTimes reports that ASE Technology could be involved in manufacturing the sensors: Apple is expected to...
Read Full Article • 30 comments