Apple yesterday posted a support document addressing the 2018 iPad Pro bending snafu that's been circulating around the internet over the course of the last couple of weeks. 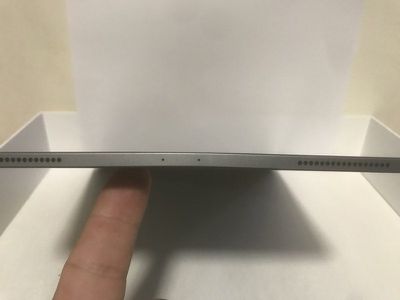 Image via the MacRumors Forums
In the document, Apple describes the new design of the unibody enclosure of the device and how cellular models use a new co-molding process to create the antenna bands in the chassis.

To provide optimal cellular performance, small vertical bands or “splits” in the sides of the iPad allow parts of the enclosure to function as cellular antennas. For the first time ever on an iPad, these bands are manufactured using a process called co-molding. In this high-temperature process, plastic is injected into precisely milled channels in the aluminum enclosure where it bonds to micro-pores in the aluminum surface. After the plastic cools, the entire enclosure is finished with a precision CNC machining operation, yielding a seamless integration of plastic and aluminum into a single, strong enclosure.

Apple says this process helps ensure the new iPad Pro models can meet a flatness specification of no more than a 400 micron deviation along any side, which less than the thickness of four sheets of paper. This is a tighter specification than on any previous model, but Apple says the new design could make any minor deviations more visible than before.

The new straight edges and the presence of the antenna splits may make subtle deviations in flatness more visible only from certain viewing angles that are imperceptible during normal use. These small variances do not affect the strength of the enclosure or the function of the product and will not change over time through normal use.

New iPad Pro owners first began noticing slight bends in their tablets shortly after the launch of the new device, prompting them to share their concerns on the MacRumors forums. iPad Pro users were worried about the structural integrity of the device, which is the thinnest iPad ever.

Users are encouraged to contact Apple if they believe their devices do not meet Apple's stated specifications, and the company reminds users of a 14-day return period and one-year warranty available on Apple products.

Apple devices have previously had issues with bending, and there was major consumer outcry over a "bendgate" controversy with the iPhone 6 Plus, which saw the iPhone bending due to regular use. iPad Pro owners are, understandably, concerned about another bendgate situation.

Apple last month told The Verge that the slight bending that some iPad Pro models are exhibiting is a side effect of the manufacturing process, caused by cooling of the metal and plastic components, but the new support document offers additional detail on the situation. While no official Apple statement was included in The Verge's article, it clearly said that Apple did not consider the bend to be a manufacturing defect, leading to customer confusion.

Sirious
This is actually not acceptable
Score: 171 Votes (Like | Disagree)

ColdShadow
if they bend, and it's visible then IT IS A DESIGN FLAW.no if, no but,no fancy terms, no manufacturing explanation will change that.
it SHOULD be flat with no visible bending.if it's not, then you've got a design flaw.
end of story.
Score: 114 Votes (Like | Disagree)

ghostface147
Don’t care. Not acceptable to have a bent iPad. No other product they have comes bent from the factory.
Score: 91 Votes (Like | Disagree)

Arran
I see macrumors is using that misleading and completely unrelated picture again.

The picture does NOT show a freshly-unboxed iPad.

The user who posted it on MacRumors (link ('https://forums.macrumors.com/threads/ipad-pros-bending-issue-merged.2052189/page-2#post-26794074')) said it did NOT come bent from the factory:

... In less than a week it’s bent. Just had it in my backpack after a weekend of travel...

The only bent thing here is MacRumours respect for the truth.

UPDATE - MacRumors has now swapped the picture for a different one. MacRumor's explanation is at post #266 ('https://forums.macrumors.com/threads/apple-addresses-2018-ipad-pro-bending-controversy-says-subtle-deviations-may-be-more-visible-due-to-new-design.2163794/page-11#post-26971049')
Score: 85 Votes (Like | Disagree)
Read All Comments