Yesterday chipmaker Qualcomm announced that it posted €1.34 billion in security bonds required for the chipmaker to enforce a preliminary injunction on select iPhone models in Germany, after a court in the country found Apple to be infringing Qualcomm patents related to power savings technology in smartphones. 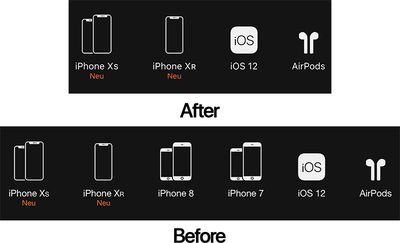 The injunction blocks the import and sale of infringing iPhone models in Germany while Apple appeals the verdict, and accordingly, Apple has now pulled the iPhone 7, iPhone 7 Plus, iPhone 8, and iPhone 8 Plus from sale in the country.

Those four iPhone models are no longer available to order via Apple.com in Germany and they have also been pulled from sale at all 15 of Apple's retail stores in the country until further notice. The latest iPhone XS, iPhone XS Max, and iPhone XR models are not impacted by the verdict and remain available.

Qualcomm's equivalent of $1.5 billion in security bonds will be put towards the cost of the lost sales if Apple successfully appeals the verdict.

Apple was also ordered to recall infringing iPhone models from third-party resellers in Germany, according to Qualcomm, but as noted by TechCrunch and Reuters, some German resellers continue to sell iPhone 7 and iPhone 8 models.

In a statement, Apple said this verdict is another "desperate attempt" by Qualcomm to distract from the "real issues" between the two companies:

Qualcomm's campaign is a desperate attempt to distract from the real issues between our companies. Their tactics, in the courts and in their everyday business, are harming innovation and harming consumers. Qualcomm insists on charging exorbitant fees based on work they didn't do and they are being investigated by governments all around the world for their behavior. We are of course disappointed by this verdict and we plan to appeal. All iPhone models remain available to customers through carriers and resellers in 4,300 locations across Germany. During the appeal process, iPhone 7 and iPhone 8 models will not be available at Apple's 15 retail stores in Germany. iPhone XS, iPhone XS Max and iPhone XR will remain available in all our stores.

In defense, Qualcomm has said its "innovations are at the heart of every iPhone" and "enable the most important uses and features of those devices," adding that it "simply is untrue that Qualcomm is seeking to collect royalties for Apple innovations that have nothing to do with Qualcomm's technology."

Qualcomm has also accused Apple of making misleading statements, sharing its trade secrets with Intel, and numerous other infractions.

Qualcomm sought a similar injunction on iPhones in the United States, unsuccessfully, and in China, where a court did issue an import ban on select iPhone models over patent infringement last month. Apple made some tweaks in iOS 12.1.2 to address the patents and continues to sell all iPhone models in China.

Yeah, they changed the force close animation (swipe up) without even considering the one I suggested:

ColdShadow
They shouldn’t be selling iPhone 7 in 2019 to begin with.
This is the issue,iPhone selling model in Jobs area was different and much more fair..
every year they released 2 models and these would replace last model for the same price.and the old model would be discontinued..

now days Apple keeps selling few years old phones,so that they can get away with jacking up the new models price significantly every time.

This business model is very unfair to the customer.
but we can see how it’s coming back and bite them hard now.

Thats the result greed for them.
Score: 14 Votes (Like | Disagree)

In a statement, Apple said this verdict is another "desperate attempt" by Qualcomm to distract from the "real issues" between the two companies

Being in breach of a patent is nothing more than theft of intellectual property. Theft is theft no matter how small and seemingly insignificant. Apple pursues patent breaches just as vigorously in the reverse and is often on the side of these things so can't really cry and complain when it doesn't go their way.

Or none at all since the prices are ridiculous
Score: 10 Votes (Like | Disagree)

thekeyring
I'll never understand how iPhone sales are banned, but the court couldn't decide on whether the Samsung Galaxy was an iPhone rip off or not.
Score: 8 Votes (Like | Disagree)
Read All Comments