The New York Times today printed an interesting article exploring how Apple co-founder Steve Jobs set up a Macintosh manufacturing plant in Fremont, California in the 1980s that failed early on into its tenure.

Titled "When Apple Was Homegrown," the piece by John Markoff offers an insight into Jobs' fascination with Henry Ford's mass automobile manufacturing in Detroit and the high-quality manufacturing capabilities of Japanese companies like Sony, and how Jobs aimed to synthesize the two cultures in a "highly automated" Mac factory. 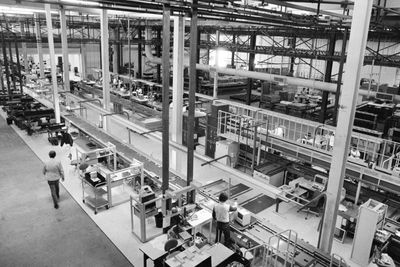 "Steve had deep convictions about Japanese manufacturing processes," recalled Randy Battat, who joined Apple as a young electrical engineer and oversaw the introduction of some of the company's early portable computers. "The Japanese were heralded as wizards of manufacturing. The idea was to create a factory with just-in-time delivery of zero-defect parts. It wasn't great for business."

Construction of the plant, located just across San Francisco Bay from Apple's headquarters, began in 1983. The first reporters to tour it were told that factory labor would account for 2 percent of the cost of making a Macintosh, thanks to its state-of-the-art production line. Expectations were therefore high, but the practical realities of working at the plant were markedly different.

Mr. Gassée, a French specialist in office automation, had just been promoted to president of Apple’s product division by John Sculley, then Apple's chief executive, and was responsible for the company's engineering and manufacturing work. When he first started, Mr. Gassée decided to spend two days learning how the company actually built its products by working on a factory production line.

"I embarrassed myself attaching a display to the computer bezel with a screwdriver," Mr. Gassée recalled in a recent interview. At the end of his shift, Mr. Gassée grabbed a broom and swept up the parts that had fallen off the production line. "It was really shameful," he said of the noticeably slipshod process.

Lacking the requisite schooling and subcontractors, Apple's Macintosh manufacturing in California was unable to reach the production volume that Jobs had envisioned. Eight years later, the plant was shuttered.

Jobs made a second attempt to establish a manufacturing culture in Silicon Valley shortly after leaving Apple. In 1990 he oversaw another $10 million plant to build his Next personal workstation. The facility featured robotic devices, but it too was unable to produce in quantities that would support a long-term assembly operation, and it failed just like its Apple predecessor.

Jobs' thinking on manufacturing had changed by the time he returned to Apple in 1997, and the next year he hired veteran supply chain overseer Tim Cook as Apple's senior VP for worldwide operations. Apple's manufacturing outsourcing quickly expanded to form a sprawling ecosystem of global suppliers.

"When I started my career, all my flights were to Japan," said Tony Fadell, one of the hardware designers of the iPod and iPhone at Apple. "Then all my flights went Korea, then Taiwan, then China."

Aside from specialist operations like the Mac Pro facility in Austin, Texas, the vast majority of Apple's manufacturing takes place outside of the U.S. Indeed, in recent years under Cook's watch as CEO, Apple's complex web of global suppliers has boomed in response to the demand of making products like the iPhone for mass markets. "You can't bring manufacturing back because of those webs," said Andrew Hargadon, a former Apple product designer who worked on the Macintosh Powerbook Duo in the early 1990s. "You would have to bring the entire community back," he told Markoff.

Recently, Apple announced plans to build a new $1 billion campus in Austin, Texas, as well as plans for a general expansion of operations over the next three years in cities across the United States. The plans are expected to create thousands more jobs, although the large majority of them aren't thought to be in manufacturing. Apple says it is on track to create 20,000 jobs in the U.S. by 2023.

Interested readers can find John Markoff's full New York Times article online but with the alternative headline, "Apple Computers Used to Be Built in the U.S. It Was a Mess."

Southern Dad
When I hear that things can't be manufactured in the USA, and I see companies moving their assembly outside of the country, I have to wonder what Lenovo knows that we do not. They assemble computers in the USA. Not all of them, but some.

What about in the automobile industry? While Ford and GM are sending their assembly outside of the USA, there are companies like Honda, Kia, Hyundai, BMW, Mercedes, and VW that assemble cars right here in the USA. What is different for those companies?

Could it be where they locate their production facilities? Just tossing this out there but Steve Jobs opened his factory in California. That's not a real corporate friendly climate. Would it have been more successful if it had opened in Texas, away from a major city? In North Carolina like Lenovo?
Score: 16 Votes (Like | Disagree)

magicschoolbus
NYTimes talking down on American manufacturing... what a surprise. Their Chinese investors must be so happy.
Score: 14 Votes (Like | Disagree)

Shivetya
I love how the NYT bends over backwards to support the regime in China that is accused of human rights issues daily and act as chief apologist for Apple's continued reliance on workers in that country.
Score: 11 Votes (Like | Disagree)

A.K.A Apple is too cheap to pay factory workers in America.

Oh please. Who made the clothes that you are wearing, and why didn’t you pay more to make sure it was from America end to end? If you want to see why businesses try to cut costs look in the mirror, and then turn it around and see where THAT was manufactured and think about why you bought the less expensive one.
Score: 8 Votes (Like | Disagree)

When I hear that things can't be manufactured in the USA, and I see companies moving their assembly outside of the country, I have to wonder what Lenovo knows that we do not. They assemble computers in the USA. Not all of them, but some.

What about in the automobile industry? While Ford and GM are sending their assembly outside of the USA, there are companies like Honda, Kia, Hyundai, BMW, Mercedes, and VW that assemble cars right here in the USA. What is different for those companies?

Could it be where they locate their production facilities? Just tossing this out there but Steve Jobs opened his factory in California. That's not a real corporate friendly climate. Would it have been more successful if it had opened in Texas, away from a major city? In North Carolina like Lenovo?

Good points. I know with cars the major hang up with making cars here is that the UAW is a huge cost burden for GM, Ford, etc and Toyota, Kia, etc do not/will not use union labor. They pay good wages/benefits but the avoid the union bloat which saves a ton of money. And Im sure that location has something to do with it too.

As for computer stuff? I believe Apple is a tad greedy here anbd could easily build everything in the USA. Sure, some profit would have to be used for this but why should shareholders be first? I hate that. Didnt used to be that way. Companies used to tke care of employees first, customers second and then shareholders got theirs. Thats how it ought to be. But, Wall Street blood-suckers ruined it. Its never enough profit or money. Ever.
Score: 8 Votes (Like | Disagree)

EvilEvil
A.K.A Apple is too cheap to pay factory workers in America.
Score: 6 Votes (Like | Disagree)
Read All Comments