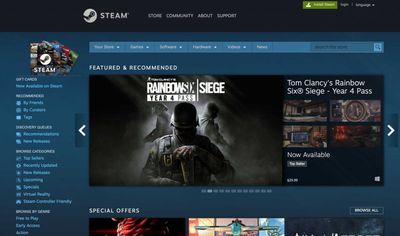 Starting on January 1 2019, Steam will officially stop supporting macOS versions 10.7 ("Lion"), 10.8 ("Mountain Lion"), 10.9 ("Mavericks") and 10.10 ("Yosemite"). This means that after that date the Steam Client will no longer run on those versions of macOS. In order to continue running Steam and any games or other products purchased through Steam, users will need to update to a more recent version of macOS.

The newest features in Steam rely on an embedded version of Google Chrome, which no longer functions on older versions of macOS. In addition, future versions of Steam will require macOS feature and security updates only present in macOS 10.11 ("El Capitan") and above.

Mac OS 10.10 "Yosemite" was released in 2014 and was replaced by 10.11 "El Capitan" in September 2015. That puts the operating system at a little over three years old. However, there still seem to be a number of users either unable or unwilling to upgrade. We recently reported that several users of Yosemite had run into an iTunes upgrade bug that prevented Safari from launching. A thread was recently posted on Steam's community forums complaining about the move as users would lose access to their game libraries if they don't upgrade.

2499723
This is the kind of reckoning we shouldn’t be terribly surprised by, but it is disappointing nonetheless. I’ve often asked the question: ‘What would happen to my Steam games if Valve were to suddenly go under?’. Steam games require Steam to be running in order to launch. ‘Offline mode’ is finicky and if I remember correctly, must first be set when you’re...online. This kind of defeats the purpose in many respects. In any case, there is a big question mark hanging over the status of our games if Valve were to shut down. This was rarely true of physical copies before they were locked down to online stores (the physical edition of Fallout 4 is hilariously a single DVD that essentially just provides a Steam code so you can download the game).

In any case, now we have a new and somewhat unexpected issue: ‘What happens if Steam won’t run on my previously supported hardware - hardware that still runs the games I intend to play on it?’. If I boot a Windows 95 machine and have the right hardware to play the Win95 version of ‘Tie Fighter’, it will run. As a collector of old Macs, I can expect a copy of ‘Prince of Persia’ to run as well on a Macintosh LC running System 7.1 today as it did when it was released in the early 1990s.

Steam - and other digital game stores like it (GOG being the only possible exception I’m aware of) turn this whole relationship with our digital past upside down. In 20 years, will I be able to play ‘Factorio’ on my vintage laptop if I happen to have purchased the Steam version? It looks highly doubtful, and that’s terribly sad for those of us who find comfort and joy in returning to old software OR for the larger number of us whose backlog is so long that they’ll be dead before they make even the slightest dent.
Score: 11 Votes (Like | Disagree)

Steam isn’t even 64-bit yet. Seems strange they wouldn’t support newer OSs before dropping older ones.

Meanwhile, if i wanted, i could still play my windows 95 CD-ROM games on a VM running win95 without issue. Another caveat of DRM i guess.

You say that, but have you actually tried playing a Win 95 game on a W95 VM? Because in my experience it doesn’t work at all. Graphics driver issues won’t even load the game. I used Parallels.

I had better luck loading 95 games on an XP VM, but even that was roulette whether or not it would work. I just ended up using Crossover.

I spent a lot of time trying to get legacy games working via VMs and I didn’t have any luck whatsoever — no exceptions, beyond BOWEP (Ski Free/Tetris) — on a 95 VM. Which games did you manage to play?

I’m pumped up for when they drop macOS for good next year, when 90% of my library doesn’t run because the hundreds of games I own are all 32-bit! Thanks for taking away my fun Apple, you know what’s best for me! I didn’t need Steam Link either!

Monday January 24, 2022 9:20 am PST by Juli Clover
AT&T today announced the launch of upgraded AT&T Fiber plans, which support speeds of up to 5 Gigabits for some customers. There are two separate plans, one "2 GIG" plan and one "5 GIG" plan, available to new and existing AT&T Fiber subscribers. According to AT&T, the new plans are available to nearly 5.2 million customers across 70 metro areas including Los Angeles, Atlanta, Chicago, San...
Read Full Article • 260 comments