Apple this week released iTunes 12.8.1 for OS X Yosemite up to macOS High Sierra. The minor update resolves an issue that prevented iTunes from streaming media to third-party AirPlay speakers, and contains other minor improvements. 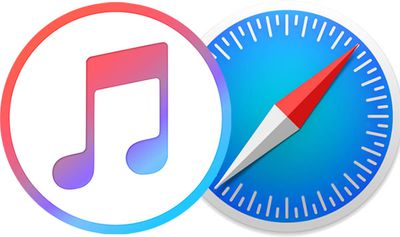 However, anyone running OS X Yosemite 10.10.5 specifically should avoid updating to iTunes 12.8.1 for now, as users across the MacRumors Forums, Twitter, Reddit, and Stack Exchange report that the update somehow breaks Safari 10.1.2, the latest version of the browser for OS X Yosemite.

After updating to iTunes 12.8.1, some users have encountered the following error message when opening Safari on OS X Yosemite:

Safari cannot be opened because of a problem.

Check with the developer to make sure Safari works with this version of Mac OS X. You may have to reinstall the application. Be sure to sure to install any available updates for the application and Mac OS X.

One user on Stack Exchange believes that the iTunes 12.8.1 update may update the MobileDevice.framework in /System/Library/PrivateFrameworks/ to a version incompatible with Safari 10.1.2, but the cause is not entirely clear. We've flagged the issue with Apple and asked if and when a fix will be available.

In the meantime, workarounds include using an alternative browser such as Firefox or upgrading to a newer macOS version — of course, those still using OS X Yosemite likely don't want to or can't upgrade. Updating to iTunes 12.9 is not possible on OS X Yosemite, as that version is only compatible with macOS Mojave.

Update - How to Fix

Some users have been able to fix Safari by opening the Finder app, clicking on Go > Go to Folder… in the top menu bar, typing in /System/Library/PrivateFrameworks/ and dragging MobileDevice.framework to the Trash.

Naraxus
What on EARTH is Federighi getting paid for? Ever since Bertrand Serle and Scott Forstal left Apple, and Craig took over, Apple software has been plagued with one bug or critical software flaw after another.
Score: 17 Votes (Like | Disagree)

Scerby
Reinstalling the OsX is not necessary!!
I had the same problem with Safari yesterday... After 2 hours of finding solution (safe boot, combo update etc.) I've just completely deleted the file "MobileDevice". The path to this file is in Safari's error message: "Referenced from: /System/Library/PrivateFrameworks/MobileDevice.framework/Versions/A/MobileDevice"

After deleting this file (on your own risk) Safari successfully opened with the last session, all bookmarks etc.

I recommend to move this file to another place or just rename it!
Score: 11 Votes (Like | Disagree)

Osxguy
Does anyone else get tired of being an unregistered beta testers for a trillion dollar company?
Score: 8 Votes (Like | Disagree)

Correct me if I’m wrong, but Apple only supports the current and -1 release of means Mojave and High Sierra. This is affecting Yosemite, released in 2014.

Well, while I might agree with the sentiment of what you're saying you're wrong. If Apple are going to not check a software update against all the OS versions it will install on they should narrow down the OS versions it will install and/or update on. Period! If you make anything install on Yosemite you're saying it will work. This is Apple's bad.
Score: 7 Votes (Like | Disagree)

pika2000
I’m surprised people are sticking to Yosemite. It was not a good macOS release. Stock apps like Mail were hugely problematic and crashing for me. It’s not until El Capitan that I enjoyed using my Mac again.
Score: 7 Votes (Like | Disagree)

chineseguy38
We want an update version of iTunes 12.6.5 for Mojave!!
Score: 7 Votes (Like | Disagree)
Read All Comments