Someone Just Paid Over $6,000 for a Steve Jobs Business Card

Earlier this month, we told you about an auction for a Steve Jobs business card listing him as Chairman of the Board at Apple Computer. The business card features Apple's classic rainbow logo and an address of 20525 Mariani Avenue, across the street from Apple's Infinite Loop campus in Cupertino, California. 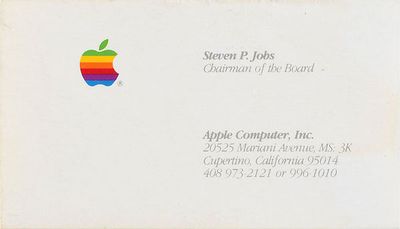 Boston-based RR Auction has since announced that the business card, estimated to fetch a modest $500, was sold for a considerably larger sum of $6,259 this week. For that price, one might think it was signed by Jobs, but it was not.

During the same auction, a copy of the February 1984 premiere issue of Macworld magazine signed by Jobs sold for $47,775, easily topping its $10,000 estimate. Limited copies of the issue are still in circulation, and Jobs was typically reluctant to provide his autograph, making it even more of a collectible.

Jobs signed the magazine at the grand opening of Apple's iconic Fifth Avenue store in New York in May 2006, writing "to Matt, steven jobs" on the front cover, which features a photo of himself next to a trio of original Macintosh computers.

Earlier this year, a rare employment questionnaire filled out by Jobs in 1973 was auctioned off for an impressive $174,757.

Chambers McMac
Like all business cards there is like 150 of those still sitting in the original box sitting in a shoe box in his old home office in the top cabinet on the right next to a pack of 9 volt batteries.
Score: 33 Votes (Like | Disagree)

AngerDanger
Meanwhile, we're still waiting for the trifecta to purchase that copy of MacWorld:

Like all business cards there is like 150 of those still sitting in the original box sitting in a shoe box in his old home office in the top cabinet on the right next to a pack of 9 volt batteries.

I’ve never been on a celebrity warship. How was it?

USS Kardashian. Lots of paint and powder, extensive modifications topside and with a very wide beam.

I’ve never been on a celebrity warship. How was it?
Score: 9 Votes (Like | Disagree)

mcdj
Dang. I bought one for $100 in 2015 that had no CEO title. The person I bought it from got it from her dad who worked at Apple in the 90s. It was described as his interim business card, just after he was re-hired but before he was made CEO.

I looked at it now and then but decided to sell it after a while. I got $300 for it and I thought that was great (more like $250 after eBay fees.

Oddly enough, the buyer was Sam Raimi’s son. Weirder still, after he paid for it, he asked me how I knew it was real, which is generally a question you ask before buying. True story.

I should have held onto it.

I’ve never been on a celebrity warship. How was it?

Better than the celibacy warship, I'd imagine.
Score: 6 Votes (Like | Disagree)
Read All Comments