A rare employment questionnaire filled out by former Apple CEO Steve Jobs was auctioned off last week, earning an impressive $174,757.

Jobs filled out the questionnaire in 1973, just after dropping out of Reed College, where he attended school for approximately six months and then audited classes for another year and a half. 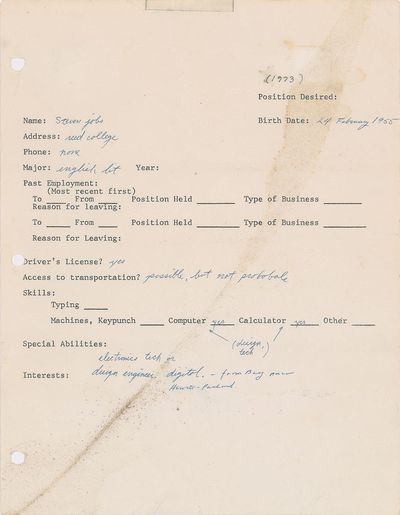 The document provided a rare look into Jobs' life at the time, with Jobs listing "english lit" as his major and Reed College as his address. "Computer" and "Calculator" were listed as skills, along with "Design" and "Tech," and Jobs said that he had special abilities that include "Electronics" and digital "Tech or Design Engineer."

Soon after filling out the employment questionnaire, Jobs took a position as a technician at Atari after showing the company a version of Pong designed by Steve Wozniak. Just two years later, Jobs, Wozniak, and Ronald Wayne founded Apple Computer in Jobs' now iconic garage.

Ahead of the auction, the auction site believed the questionnaire would fetch over $50,000, but it ended up tripling that estimate.

A separate auction for an Mac OS X technical manual signed by Jobs in 2001 also brought in $41,806, while a signed newspaper clipping that Jobs signed sold for $26,950.

Even back then, wouldn’t talk about upcoming products...
Score: 13 Votes (Like | Disagree)

4jasontv
Man - the simple days when that was a job application.
Score: 10 Votes (Like | Disagree)

Pupi
Possible but not probabale.
Score: 8 Votes (Like | Disagree)

Sirious
He didn't have a phone, so he made his own
Score: 7 Votes (Like | Disagree)

ookladek
Man every time I see something like this about Steve's past and see how he used to ride hard on Wozniak's back i feel bad for woz.
Score: 5 Votes (Like | Disagree)

nwcs
The first is an interesting historical trivia but it won’t likely have lasting value. It’s not exactly a letter penned by George Washington or an extant copy of the Magna Carta. The people who sold these sold them at a good time to maximize the current value.
Score: 4 Votes (Like | Disagree)
Read All Comments