Apple Orders J.J. Abrams-Produced Series 'My Glory Was I Had Such Friends' Starring Jennifer Garner

Apple has reportedly given a straight-to-series order for a show starring Jennifer Garner and executive produced by J.J. Abrams. 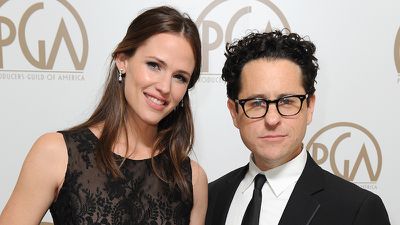 Image Credit: Jordan Strauss/Shutterstock via Variety
"My Glory Was I Had Such Friends," based on the 2017 memoir of the same name by Amy Silverstein, will follow a group of women who supported Silverstein as she waited for a second life-saving heart transplant, according to Variety.

The series reunites Garner and Abrams, who worked together on the ABC show "Alias" between 2001 and 2006. Garner starred in the drama series, which was created by Abrams and produced by his company Bad Robot Productions and what was then called Touchstone Television, now known as ABC Studios under Disney.

Bad Robot Productions will also produce this series in association with Warner Bros. Television, as part of a deal between the companies.

Garner most recently starred in the HBO series "Camping," and she also starred in the 2017 film "The Tribes of Palos Verdes," according to the report. She is also known for her work in films like "Dallas Buyers Club," "13 Going on 30," and "Juno."

Abrams and Bad Robot have previously produced shows like "Lost," "Fringe," "Person of Interest," and the ongoing HBO series "Westworld." Abrams is also known for films like "Super 8," "Star Wars: The Force Awakens," and the "Star Trek," "Mission: Impossible," and "Cloverfield" franchises, the report adds.

"My Glory Was I Had Such Friends" will be one of well over a dozen original TV series and movies expected to be distributed through Apple's rumored streaming video service, which will reportedly launch in more than 100 countries in 2019. Abrams is also set to produce the series "Little Voices" for Apple.

Spoon!
Apple seems to be picking the most boring sounding shows/movies I’ve ever heard of.
Score: 25 Votes (Like | Disagree)

AngerDanger
Followed shortly by orders for "It's Not Very Nice to Have the Same," "I Don't Know if I Wanna Was," and "You Have any Chance That We Will."

cocky jeremy
What a terrible name.
Score: 13 Votes (Like | Disagree)

Dranix
Nothing made by Abrams is worth watching...
Score: 11 Votes (Like | Disagree)

yaxomoxay
Is Apple trying to make Netflix look good??? I mean, each and every show that has been announced seems a boring fest full of Apple exec’s friends.
Score: 9 Votes (Like | Disagree)

Nothing made by Abrams is worth watching...

Abrams is a Hack
Score: 9 Votes (Like | Disagree)
Read All Comments

Sunday January 23, 2022 2:59 am PST by Tim Hardwick
Apple has always emphasized the depth of thought that goes into the design of its products. In the foreword to Designed by Apple in California, a photo book released by the company in 2016, Jony Ive explains how the company strives "to define objects that appear effortless" and "so simple, coherent and inevitable that there could be no rational alternative." But every once in a while even...
Read Full Article • 298 comments

Sunday January 23, 2022 10:32 am PST by Juli Clover
Apple is working on a number of new products that are set to launch this fall, and Bloomberg's Mark Gurman says that it will be "the widest array" of new devices that Apple has introduced in its history. In his latest "Power On" newsletter, Gurman explains that Apple is working on four new iPhones (iPhone 14, iPhone 14 Max, iPhone 14 Pro, and iPhone 14 Max), an updated low-end MacBook Pro, a ...
Read Full Article • 153 comments