Apple Pay made its long-awaited debut in Germany this evening, allowing iPhone and Apple Watch users in the country to finally take advantage of the contactless mobile payments service if their card issuer supports it. 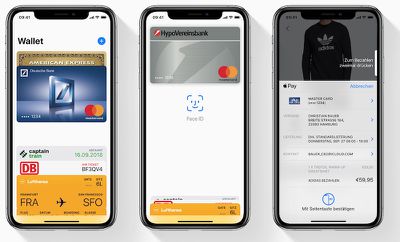 At launch, Apple Pay partners in Germany include American Express, Deutsche Bank, Hanseatic Bank, HypoVereinsbank, Edenred, Comdirect, Fidor Bank, and mobile banks and payment services o2, N26, boon, bunq, and VIMpay. It may take until the end of the day before the rollout is fully completed.

MacRumors readers and Twitter users are starting to share screenshots of their Apple Pay cards in the Wallet app on iPhone.

Update: Apple has now listed German banks that will offer Apple Pay in 2019, such as ING, Consorsbank, and Deutsche Kreditbank.

tuckerjj
A sad day, now Germans will have nothing to complain about.
Score: 12 Votes (Like | Disagree)

Oh, there will always be something. Good example - shopping carts in Germany need a little free token (That you can get for free so easily), or a small coin which you get back when you return the Cart to the stack. Some Years ago the carts at our local Supermarket stopped accepting a 50 cent coin, & instead it had to be a one Euro coin (Which, as I say, you get back). For weeks after the conversion, I'd regularly be grabbing a cart, & there would be a couple of random people nearby complaining about the "Price Increase" ;)
Score: 8 Votes (Like | Disagree)

There is still a lot to complain ;)
ECG anyone?
Score: 8 Votes (Like | Disagree)

No we still can complain about apple news, the ecg feature an a lot more ;)
Score: 8 Votes (Like | Disagree)

yadmonkey
I've been to Germany many times and I've always noticed just how much more cash is used there compared to the United States. The difference is stark, at least in my experience. I've always respected it, as I think it shows a more direct relationship to your money, as opposed to how we in the States rarely handle cash in our day to day. Here it is more in the ether and less real. I guess times are changing in the Fatherland too.
Score: 5 Votes (Like | Disagree)

Of course I have, my two banks aren’t listed
Score: 5 Votes (Like | Disagree)
Read All Comments