Apple will be releasing iOS 12.1.1 today, likely around 10:00 a.m. Pacific Time as usual, with several new features and bug fixes, including eSIM support for additional carriers on the latest iPhones, Live Photos support in FaceTime, Haptic Touch for notifications on iPhone XR, a Face ID bug fix, and more. 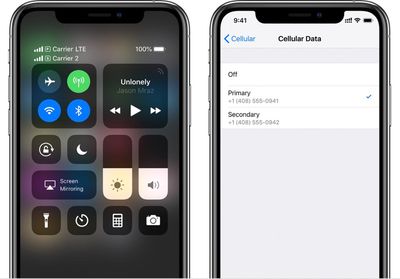 iOS 12.1.1 adds features and fixes bugs for your iPhone and iPad. Features and improvements include:

- Notification preview using haptic touch on iPhone XR
- Dual SIM with eSIM for additional carriers on iPhone XR, iPhone XS, and iPhone XS Max
- One tap to flip between the rear and front-facing camera during a FaceTime call
- Live Photo capture during one-to-one FaceTime calls
- The option to hide the sidebar in News on iPad in landscape orientation
- Real-time text (RTT) when using Wi-Fi calling on iPad and iPod touch
- Stability improvements for dictation along with VoiceOver

This release also adds features and fixes bugs for HomePod including:

iOS 12.1.1 will be the minimum required iOS version for viewing ECG-related data in the Health app on iPhone from the ECG app on the Apple Watch Series 4, but we'll have to wait on the release of watchOS 5.1.2 for that.

avanpelt
One tap to flip the camera in a FaceTime call once again. THANK GOD!
Score: 16 Votes (Like | Disagree)

DeadSeaMac
Does it fix the LTE issues with the crappy Intel Modem inside my iPhone XS Max?
Score: 7 Votes (Like | Disagree)

Oh thank god. That was maddening!
Score: 5 Votes (Like | Disagree)

macduke
Hopefully this means the new watchOS is coming with support for ECG!
Score: 4 Votes (Like | Disagree)

Hopefully this means the new watchOS is coming with support for ECG!

Really hoping to see the ECG feature released too!

And even more, hoping for a way to get it on my watch here in Denmark.