ECG functionality will be enabled on the Apple Watch Series 4 in the publicly released version of watchOS 5.1.2, which is currently in beta testing, according to an internal Apple Store training document obtained by MacRumors. 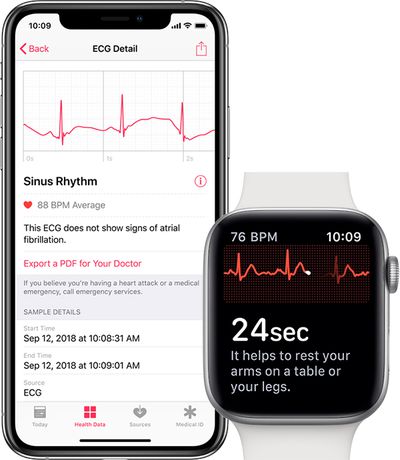 watchOS 5.1.2 will feature an Apple-designed ECG app that can indicate whether your heart rhythm shows signs of atrial fibrillation, a serious form of irregular heart rhythm, or a normal sinus rhythm. Apple Watch Series 4 is capable of generating an ECG similar to a single-lead electrocardiogram, according to the FDA.

ECG and other heart data is collected in the Health app on a paired iPhone. Apple's document lists a minimum requirement of an iPhone 5s or later running iOS 12.1.1, currently in beta testing, or later.

To take an ECG reading from the Apple Watch, users will need to place a finger on the Digital Crown while wearing the watch. The reading is completed in 30 seconds, allowing users to determine whether their hearts are beating in a regular pattern or if there are signs of atrial fibrillation.

Apple's training document states that the ECG app is regulated and only available in regions cleared for use. The app will initially be limited to the United States, where Apple has received FDA clearance, but Apple Watch Series 4 models sold worldwide include the electrical heart sensor for future expansion.

Apple Store employees are instructed to advise customers that the ECG app is "not intended to be a diagnostic device or to replace traditional methods of diagnosis," and "should not be used to monitor or track disease state or change medication without first talking to a doctor," according to Apple's document.

The ECG app will not be available on previous-generation Apple Watch models, including the original through Series 3.

Why would you be pissed? It wasn't a function when you purchased it, and it wasn't promised by apple...
Score: 49 Votes (Like | Disagree)

Am I the only one scared that my Watch will tell me I'm going to die?

AngerDanger
Can’t wait to see which of my hearts the ECG measures.

Good idea. Health is a huge market and Apple is well positioned to control the wrist real estate. But, to succeed they need to make the Watch fully function with non-Apple phones and tablets.

No they don't. This is very sensitive health data, and it's not Apple's job to facilitate building a doorway for a bunch of hackneyed Android devs to screw it up and cause problems. Then Apple will be blamed for Google's failure to properly secure their platform. That's to say NOTHING of insurers, who would love to "better serve you" by accessing that and deciding how quickly they want to lobby you off their roster.
Score: 15 Votes (Like | Disagree)

No they don't. This is very sensitive health data, and it's not Apple's job to facilitate building a doorway for a bunch of hackneyed Android devs to screw it up and cause problems. Then Apple will be blamed for Google's failure to properly secure their platform. That's to say NOTHING of insurers, who would love to "better serve you" by accessing that and deciding how quickly they want to lobby you off their roster.

This comment reflects poorly on you. Even I'm embarrassed. Did you also wonder why your 6s Plus never grew a second camera? Or why your iMac didn't form a cocoon and emerge as an iMac Pro? Honestly, what do you people want Apple to do—never innovate, or give you a free device upgrade every year? The entitlement never ceases to amaze me.
Score: 11 Votes (Like | Disagree)
Read All Comments

Saturday February 4, 2023 10:05 am PST by Eric Slivka
Online retailer TigerDirect has slashed pricing on the M1 iPad Air in several colors, offering the base 64GB configuration for just $313.99 in Purple and Pink. Note: MacRumors is an affiliate partner with TigerDirect. When you click a link and make a purchase, we may receive a small payment, which helps us keep the site running. That's a savings of 48% compared to Apple's normal $599.00...
Read Full Article • 359 comments

Sunday February 5, 2023 6:07 am PST by Joe Rossignol
Apple has discussed selling a new top-of-the-line iPhone alongside the Pro and Pro Max models in 2024 at the earliest, according to Bloomberg's Mark Gurman. Based on this timeframe, the device would be part of the iPhone 16 lineup or later. In a September 2022 edition of his weekly "Power On" newsletter, Gurman said there was "potential" for an iPhone 15 Ultra to replace the iPhone 15 Pro...
Read Full Article • 318 comments