In honor of World AIDS Day, which takes place on December 1, Apple has started turning the Apple Store logos at many of its retail locations around the world red.

Apple CEO Tim Cook shared some photos of the red logos on Twitter this afternoon. 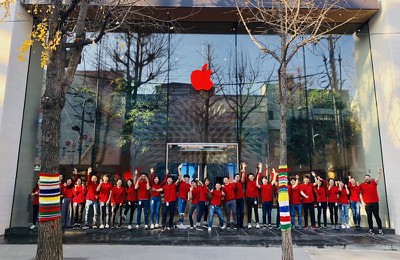 Apple stores around the world are turning red to honor #WorldAIDSDay. Together, we can achieve an AIDS-free generation. pic.twitter.com/rdySNTAWdn — Tim Cook (@tim_cook) November 30, 2018

Apple marketing chief Greg Joswiak earlier this week said that Apple plans to turn the logos at 125 stores red, with another 400 stores set to feature red decals over their Apple logos. The red coloring is meant to raise awareness for the global fight against AIDS.

Apple plans to promote World AIDS Day in its retail locations over the course of the next week. From Saturday, December 1 to Friday, December 7, $1 of every Apple Pay purchase made at an Apple Store, through the Apple Store app, or on the Apple website will be donated to (RED), the charity Apple has worked with for years.

(RED) focuses on putting an end to AIDS in Africa through money given to The Global Fund. Yesterday, Apple said it has raised $200 million for (RED) through the exclusive (PRODUCT)RED merchandise that it sells.

When Apple customers purchase a (PRODUCT)RED device or accessory, a portion of the proceeds is donated to (RED).

tl01
Can we start supporting childhood cancer research sometime? That would be awesome to. I think that ribbon color is gold.
Score: 14 Votes (Like | Disagree)

Couldn’t they just donate a hundred million? That would be nothing for them

Yesterday, Apple said ('https://www.macrumors.com/2018/11/29/apple-raised-200-million-for-product-red/') it has raised $200 million for (RED) through the exclusive (PRODUCT)RED merchandise that it sells.

AngerDanger
So, hypothetically, if AIDS Day and Earth Day were to fall on the same day…

Chloros
Great Marketing for Apple....look good while profiting off peoples hearts. Why give a straight donation when you can profit from it.
Score: 9 Votes (Like | Disagree)

IF (int AIDS > 0) THEN LED = System.Drawing.ColorTranslator.FromHtml(FF0000)

Wait, why are you declaring an uninitialized variable then immediately comparing it?
Score: 9 Votes (Like | Disagree)

AtomicDusk
I've bought my fair share of (Red) products from  for this reason. Good for them and their support.
Score: 8 Votes (Like | Disagree)
Read All Comments

Sunday August 1, 2021 6:21 am PDT by Sami Fathi
Models of the Apple Watch Series 6 with titanium cases part of the "Apple Watch Edition" collection is currently widely unavailable for pick-up in several of Apple's retail stores in the United States and is unavailable entirely for delivery in major markets. Noted by Bloomberg's Mark Gurman in the latest edition of his "Power On" newsletter, titanium models of the Apple Watch Series 6,...
Read Full Article • 152 comments