CarPlay will be a standard feature in the all-new 2019 Mazda3, excluding the base model, according to a company spokesperson. The vehicle is making its worldwide debut at the Los Angeles Auto Show this week and will be rolled out to global markets over the coming months, starting with North America in early 2019.

CarPlay will also be available as a standard feature in the 2019 Nissan Rogue Sport and 2020 Toyota Corolla Hybrid, equipped with seven- and eight-inch touchscreens respectively. The new Rogue Sport is available now at Nissan dealerships in the United States, while the new Corolla Hybrid goes on sale in spring 2019.

Toyota and Mazda were among the last major automakers to offer factory-installed CarPlay, but each has expanded its lineup of vehicles integrated with Apple's software, which provides convenient dashboard access to apps such as Phone, Messages, Apple Maps, Google Maps, Waze, Apple Music, and Spotify.

AngerDanger
Thanks, but no thanks. I've already got a far more cheap, elegant, and cheap solution…

Rychiar
I love CarPlay in my Honda civic...when it works right and doesn't disconnect every 2 mins....
Score: 2 Votes (Like | Disagree)


CarPlay will be a standard feature in the all-new 2019 Mazda3 ('https://insidemazda.mazdausa.com/press-release/mazda-reveals-all-new-mazda3/'), excluding the base model, according to a company spokesperson. The vehicle is making its worldwide debut at the Los Angeles Auto Show this week and will be rolled out to global markets over the coming months, starting with North America in early 2019. 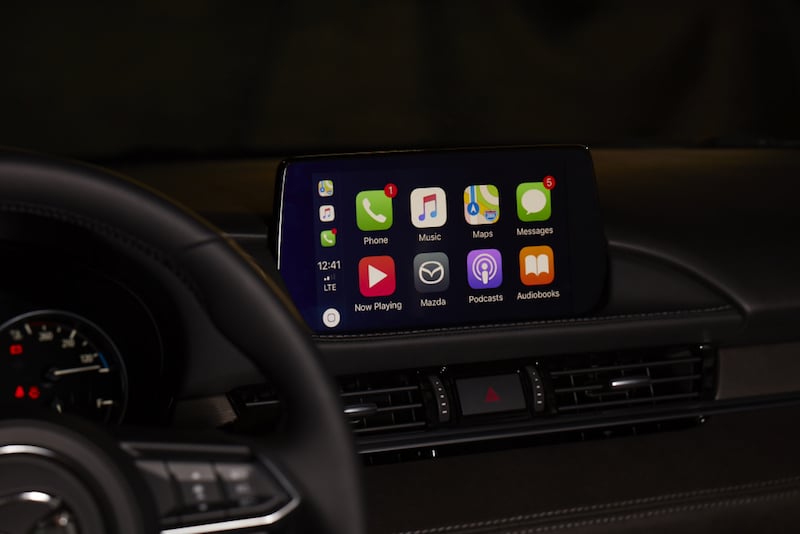 CarPlay in a Mazda vehicle

CarPlay will also be available as a standard feature in the 2019 Nissan Rogue Sport ('https://nissannews.com/en-US/nissan/usa/releases/nissan-announces-u-s-pricing-for-2019-rogue-sport') and 2020 Toyota Corolla Hybrid ('https://pressroom.toyota.com/releases/electrifying+design+meets+electrified+power+first+ever+corolla+hybrid.htm'), equipped with seven- and eight-inch touchscreens respectively. The new Rogue Sport is available now at Nissan dealerships in the United States, while the new Corolla Hybrid goes on sale in spring 2019.

Toyota and Mazda were among the last major automakers to offer factory-installed CarPlay, but each has expanded its lineup of vehicles integrated with Apple's software, which provides convenient dashboard access to apps such as Phone, Messages, Apple Maps, Google Maps, Waze, Apple Music, and Spotify.

These fools are too late to the party. I just picked up a 2019 XC90. I was considering a Toyota Highlander but lack of CarPlay pushed me to Volvo. Though I must admit, Volvo’s Pro-Pilot assist also played a roll.
So, suck it Toyota.
Score: 1 Votes (Like | Disagree)

I thought of using my iPhone 8 mounted securely and with a properly installed power supply and bluetooth speaker also installed. But their is one problem: My iPhone 8 will not go into landscape mode on Home screen. It will go to landscape in every other situation and App. I have tried all the recommended fixes to date.
Model AA1863. IOS 12.1

This is a joke right?
Score: 1 Votes (Like | Disagree)

I was trying to get a Toyota C-HR

You are probably better off with the Crosstrek. The C-HR looks nice (imo), but it is so freaking heavy. Which is really strange considering it doesn't have AWD, or a big motor.

The Crosstrek has more power, but weighs a few hundred pounds less, gets better MPG and has AWD standard. They have also offered CarPlay as a standard for a couple of years now.
Score: 1 Votes (Like | Disagree)

I love CarPlay in my Honda civic...when it works right and doesn't disconnect every 2 mins....

I got this installed in my 2016 3 last Friday after the update came out and while it was expensive it fixed the two things I liked least about my car: the Mazda Infotainment system itself, and the extremely under-powered USB port that was previously installed in the console. Honestly getting a USB port that actually charges my device vs. simply keeping it powered was worth it for me, and I've been enjoying CarPlay too. Not everyone may agree, but this was good for me.
Score: 1 Votes (Like | Disagree)
Read All Comments

Apple Card 6% Daily Cash Listings for Apple Purchases Were in Error, but Apple is Honoring Them