Mazda today announced that CarPlay and Android Auto are now available as part of a dealer-installed upgrade in select 2014 model year and newer Mazda vehicles equipped with the Mazda Connect infotainment system in the United States. 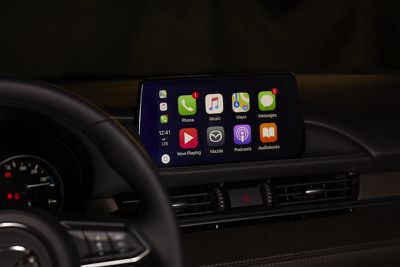 The dealer-installed upgrade has a suggested price of $199 plus the cost of labor and includes both hardware and software components. Eligible vehicles will be equipped with a faster-charging 2.1-amp USB port, in addition to the latest version of Mazda Connect with CarPlay and Android Auto integration.

Eligible customers can schedule an appointment with a Mazda dealership to have the approximately two-hour upgrade service completed.

CarPlay and Android Auto will also be preinstalled in 2018 Mazda6 vehicles manufactured in November 2018 or later, excluding the Sport model, in the United States. Those who purchased a 2018 Mazda6 earlier in the year can opt for the dealer-installed upgrade option with the $199 fee waived.

Mazda previously announced that CarPlay would be available as a dealer-installed upgrade for a suggested price of $443 including labor in Canada by November, but it's unclear if the option is available there yet. It's also available in the UK for £350.

Evan Blue
Yay! Now I can call my dealer for them to say “what’s CarPlay?”
Score: 26 Votes (Like | Disagree)

The dealer-installed upgrade has a suggested price of $199 plus the cost of labor and includes both hardware and software components.

Haha, yeah, thanks, but I've got a cheaper and far more elegant solution:

Maybe it's me, but CarPlay is pretty underwhelming. Especially if your car has built in navigation. The only thing I use it for is sending and receiving texts.

[LIST=1]
* CarPlay gets upgraded over time with the iOS and App upgrades. Auto nav doesn't usually get upgraded.
* CarPlay is far better than what people are doing (mounting their phone in particular)
* Like you mentioned, sending messages and calling people is super easy.
* While the input method varies from car to car, it standardizes the interfaces for iPhone users

Yeah i just got a new car and thought wow great CarPlay.
SNOOZE.
Come on Apple This could be so much better. Kind of a Joke.
Can't imagine what a POS it was before the last update that allowed other apps to work in it.

What do you need it to do? It's designed to be pretty limited because you're DRIVING A CAR

redpandadev
If Toyota offered this, I'd already be at the deal giving them my money. It sucks for 2018 buyers, but I feel like $199 is a fair price given that hardware components are part of the deal. An aftermarket unit could cost anywhere from double to ten times that much
Score: 11 Votes (Like | Disagree)

ziggy29
Your move, Toyota. Please do something about your horrible Entune suite.
Score: 7 Votes (Like | Disagree)
Read All Comments