Twitter has changed the way the Explore tab works in its official iOS app, with entries now organized based on topic and divided up into separate navigable sections.

Twitter says the update should make exploring the platform easier than ever, with users able to find trending tweets on specific topics by tapping the designated tabs for news, sports, fun, and entertainment. 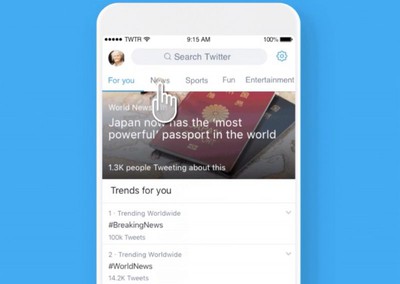 Starting today in the US, we’re making it easier than ever for you to explore Explore. Tabs at the top of the page organize all the best Tweets, picked just for you. Perusing topics like news, sports, fun, and entertainment is now just a quick tap away! pic.twitter.com/LkgYAUZ4WJ — Twitter Support (@TwitterSupport) November 14, 2018

Users in the United States can start accessing the new Explore tabs today, with availability likely to roll out gradually to other regions and territories, all being well.

Earlier this month, Twitter added a new compose button to its official mobile app for iOS, with the aim of enabling one-handed scrolling and tweet composing. Twitter is also testing an option to quickly access a classic reverse chronological timeline, as promised back in September.

jsmith189
I feel like they're just purposely ignoring what the audience are screaming out for at this point lol.

Also... adds a compose button on the bottom right hand corner for ease of reachability... but leaves the final "tweet" button in the top right hand corner anyway.
Score: 1 Votes (Like | Disagree)
Read All Comments

Tuesday June 2, 2020 1:31 am PDT by Tim Hardwick
Apple Music has cancelled its Beats 1 radio schedule for Blackout Tuesday and is suggesting that listeners tune in to a radio stream celebrating the best in black music. Blackout Tuesday is a campaign organized by the music industry to support Black Lives Matter after Minneapolis citizen George Floyd was killed by police in the course of his arrest. On launching Apple Music, many users...
Read Full Article • 430 comments

Thursday June 4, 2020 10:07 am PDT by Juli Clover
We still have a few months to go before Apple unveils the iPhone 12, but rumors about the iPhone 13, coming in fall 2021, are already circulating. Japanese site Mac Otakara today shared a rough 3D printed mockup of a 5.5-inch iPhone said to be coming in 2021, which is from "Alibaba sources." The model may be built on leaked specifications and rumors, but where the info comes from is unclear. ...
Read Full Article • 109 comments