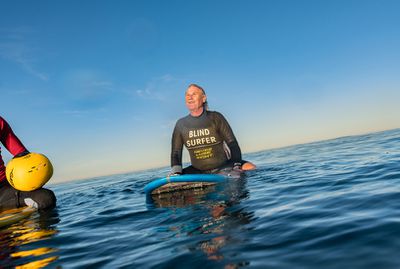 Scott Leason surfboards at Mission Beach
A veteran of the U.S. Navy, Leason was blinded in 1993 after seven years of service. After years of adapting to his new normal, he received an iPhone 5 in 2012, along with training from Sarah T. Majidzadeh, assistant chief of blind rehabilitation at the Tibor Rubin VA Medical Center in Long Beach, California.

Leason is one of many individuals who are blind or have low vision who rely on the iPhone's built-in VoiceOver screen-reading software for daily tasks.

"It's a lot easier to navigate with the phone," Leason told Apple for its story. "I think a lot of the visually impaired prefer the iPhone because they can do everything on it. And VoiceOver works pretty darn good."

VoiceOver is a gesture-based reader introduced on iPhone in 2009, which made it the world's first fully accessible smartphone user interface for the blind, according to Apple. 76 percent of blind and low-vision people using a mobile screen-reading platform choose VoiceOver, per a December 2017 survey by WebAIM.

Scott Leason uses his iPhone XR to prepare for a surf
A competitive surfboarder, Leason has since upgraded to an iPhone XR, which he uses to review the day's surf reports via the Surfline app to prepare for the day's ride, typically at Mission Beach in San Diego. He also wears an Apple Watch Series 4 to track his surfing workouts in the water and at home.

"It's amazing how long ago 10 years feels in the world of technology," said Kevin Waldick, assistant director at the Mission Bay Aquatics Center. "He was not very technologically savvy at all, but when he got his iPhone he was like 'I can just do it. This is amazing.' And so Apple does a really amazing job of making that accessible."

Scott Leason starts a surfing workout on Apple Watch Series 4
Leason was the first blind champion at the USA Adaptive Surfing Championships at Oceanside Harbor North Jetty in June 2016. The same year, he won second place in men's tricks at the USA Water Ski competition in Harmony, North Carolina. In 2018, he competed in seven competitions in four different sports.

nwcs
I will always applaud Apple for their commitment to accessibility. They haven’t only done this recently. They have made devices with an eye to the disabled for decades. It’s something most of us won’t directly benefit from but for many people it’s the difference between joining the active world and being further isolated.
Score: 10 Votes (Like | Disagree)

Eddy Munn
It's incredible how technology is able to assist so many people in so many ways.
Score: 4 Votes (Like | Disagree)

What’s your point? Who cares about Siri in this article?

It's actually an interesting distinction. The story mention iOS's built-in voiceover screen reading software but not Siri. Some users rely on Siri more than touch for small screens like Watch but when you're blind, Siri is everything. I think Apple is trying to highlight the fact that they're OS has built-in features for impaired individuals without getting into the weeds with all the Siri haters out there. Users without impairments take Siri for granted and complain much more than users that truly need Siri. Like all voice assistants, Siri is nowhere close to being a useful assistant we were promised but that day is coming. Like it or not, Apple users will soon all rely heavily on Siri for nearly everything. I just hope Apple can meet or exceed the expectations they have already set.
Score: 3 Votes (Like | Disagree)

freezelighter
We complain about the new Mac Mini, about the bad food apps and about the rainy weather.
This guy is blind.
Think twice before complaining.
Score: 2 Votes (Like | Disagree)

DrJohnnyN
Apple... tugging at your heartstrings.
Score: 1 Votes (Like | Disagree)
Read All Comments