The repair experts at iFixit have completed their teardown of the new Mac mini, providing a look inside the portable desktop computer. 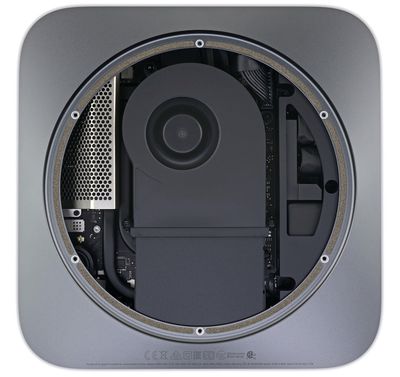 Disassembly of the new Mac mini remains fairly straightforward. iFixit popped off the plastic bottom cover with its opening tool and then used a Torx screwdriver to unfasten the familiar antenna plate underneath.

With access to the inside, iFixit then unscrewed the fan and popped out the logic board with some old-fashioned thumb pressing. While the RAM in the previous-gen Mac mini from 2014 was soldered to the logic board, the new Mac mini has user-upgradeable RAM, as discovered earlier this week.

As seen in older iMacs, the RAM is protected by a perforated shield that allows the memory modules to operate at a high frequency of 2666 MHz without interfering with other device functions, according to iFixit. To upgrade the RAM, the shield can be removed by unfastening four Torx screws.

Other silicon on the logic board of this particular Mac mini includes the Apple T2 security chip, a 3.6GHz quad-core Intel Core i3 processor, Intel UHD Graphics 630, 128GB of flash storage from Toshiba, an Intel JHL7540 Thunderbolt 3 controller, and a Gigabit Ethernet controller from Broadcom.

Despite the good news about the RAM, the CPU and SSD are soldered to the logic board, as are many ports, so this isn't a truly modular Mac mini.

iFixit awarded the new Mac mini a repairability score of 6/10, with 10 being the easiest to repair, topping the latest MacBook Air, MacBook, MacBook Pro, iMac, and iMac Pro, and trailing only the 2013 Mac Pro.

"Back in the day, a Pro Mac meant a computer you could upgrade, configure, and connect as you pleased," iFixit's teardown concludes. "This new mini aligns so well with that ideal that we're surprised it didn't earn itself a "Pro" title—especially compared to the increasingly closed-off MacBook Pro line."

The new Mac mini earned its higher repairability score thanks to its straightforward disassembly with no tough adhesive or proprietary pentalobe screws and user-upgradeable RAM. However, it didn't earn a perfect score due to the soldered-down CPU, storage, and ports, impacting repairs and upgrades.

seanbperiod
Soldered 128GB is an absolute insult to their customers. How much does 128GB cost, like $20? Probably even much less at cost for Apple. There's no reason at all to not have the lowest tier start at 256GB, or even 512GB if they even pretended to care about their customers, instead of forcing people to upgrade to 256GB for an extra $200, which is even more insulting.

But they know many of us are locked into the system and won't switch to PC. This must be what an abusive relationship feels like.
Score: 48 Votes (Like | Disagree)

rednif
The soldered on SSD is a dealbreaker. Plain and simple. There goes another option to replace my old MBP...
Score: 36 Votes (Like | Disagree)

Why not just buy an iMac with dedicated graphics? With that Mac Mini setup you’d be spending at least $800 PLUS an eGPU PLUS a monitor, and it will take up way more physical space.

Because the end user could replace the display and/or eGPU anytime. As newer ones are released... upgradability.
Score: 36 Votes (Like | Disagree)

The soldered on SSD is a dealbreaker. Plain and simple. There goes another option to replace my old MBP...

I think it is better to have a soldered SSD than soldered RAM. You can always expand storage via an external drive, but you can't get more RAM.
Of course it would be great to being able to replace BOTH, but if I had to chose I'd pick RAM over SSD.
By the way, I think since they're using the T2 even for the disk we can't expect to be able to replace the storage in the future.
Score: 31 Votes (Like | Disagree)

Let's be real, for most users the ram is too hard to install. It can be done by a lot of tech people but not the average user.

Not the average user no, but for anyone who’s ever built their own PC it’s really easy.
Score: 28 Votes (Like | Disagree)
Read All Comments

Saturday May 21, 2022 9:00 am PDT by Hartley Charlton
With around four months to go before Apple is expected to unveil the iPhone 14 lineup, the overwhelming majority of rumors related to the new devices so far have focused on the iPhone 14 Pro, rather than the standard iPhone 14 – leading to questions about how different the iPhone 14 will actually be from its predecessor, the iPhone 13. The iPhone 14 Pro and iPhone 14 Pro Max are expected...
Read Full Article • 286 comments