The repair experts at iFixit have completed their teardown of the new MacBook Air, providing a closer look inside the notebook.

iFixit started by confirming the keyboard on the new MacBook Air has the same silicone membrane under the keycaps as the latest MacBook Pro, as expected since they both use Apple's third-generation butterfly keyboard. 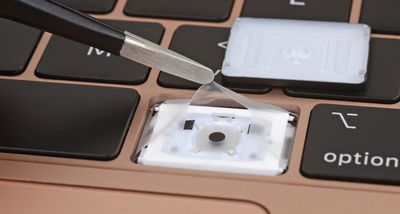 Next, they flipped the notebook onto its bottom side and encountered Apple's usual pentalobe screws that require a special screwdriver to unfasten. On the inside, there is a compact array of components, including a small logic board, a fan, a pair of large speakers, and a "radiator-esque heat sink."

iFixit proceeded to remove the logic board, providing a glimpse at the Apple T2 security chip, along with a Thunderbolt 3 controller from Intel, 128GB of flash storage from SanDisk, and 8GB of LPDDR3 RAM from SK Hynix.

Diving deeper, iFixit discovered that the two Thunderbolt 3 ports in the new MacBook Air are modular, and applauded Apple for this repair-friendly design consideration. "This MacBook is off to a good start as far as we're concerned," they wrote. "All the ports sit on their own boards and are easily replaceable."

"The mere presence of stretch-release adhesive generally means that someone at least thought about possible repair and disassembly situations," the teardown says. "Are you there, Apple? It's us, iFixit. Have you heard our pleas?"

As first reported by MacRumors, the battery in the new MacBook Air is still glued into the top case — the aluminum enclosure that houses the keyboard and trackpad — but Apple will be providing Apple Authorized Service Providers with tools to remove the battery and reinstall a new one with no top case replacement required.

In all other MacBook and MacBook Pro models with a Retina display released since 2012, Apple has replaced the entire top case when a customer requires a new battery, so the change is good news for both repairability and the environment.

While the new MacBook Air has improved repairability relative to Apple's standards, the notebook earned a low 3/10 repairability score from iFixit.

"The Air still uses external pentalobes to keep you out, requires lots of component removal for common fixes, and both RAM and storage are soldered to the logic board," said iFixit. "All together, that means Apple has an easy time with their knowledge and tools, but the average DIYer is left out to dry when it comes to upgrades."

Nevertheless, iFixit said it hopes this is "just the beginning of an upswing in repairable design" for Apple products.

Jsameds
That thing is a work of art on the inside and out.
Score: 15 Votes (Like | Disagree)

What with this and non-soldered RAM in the Mini, maybe Apple realised replacing half the computer for one failed module was causing repair costs to spiral. Im pleased to see greater repairability, now stop glueing on iMac displays!

This isn't about Apple making things better for their customers, but is just Apple playing “defense” for their own cost benefit: this change reduces their internal costs for warranty service.

Case in point: has the price of Applecare been lowered to pass this benefit along to customers?
Score: 14 Votes (Like | Disagree)

nt5672
Yep, I refuse to buy an Apple laptop with glued in batteries, soldered in RAM, and non-replaceable SSD. No reason for this except Apple greed. Now that the iPhone is a commodity (not growing by leaps and bounds), maybe Apple will take the time to make some of their long term customers happy again. Not counting on it with a finance guy in charge, but one can hope.
Score: 11 Votes (Like | Disagree)

magicschoolbus
The lack of repairability and user upgradeable products is why I have not purchased a laptop from them since 2012. My Classic MacBook Pro is a trooper. it's logged serious miles.. and I can still open it up and fix whatever may go wrong.
Score: 9 Votes (Like | Disagree)

Yep, I refuse to buy an Apple laptop with glued in batteries, soldered in RAM, and non-replaceable SSD. No reason for this except Apple greed. Now that the iPhone is a commodity (not growing by leaps and bounds), maybe Apple will take the time to make some of their long term customers happy again. Not counting on it with a finance guy in charge, but one can hope.

Return Zero
This is a beautiful machine. It's a shame they couldn't keep the base price at $999, considering the Y-series chip and 128GB storage. I'll probably pick one up to replace my old Air whenever refurb units start to show up.
Score: 8 Votes (Like | Disagree)
Read All Comments