Apple today released iOS 12.1, which reintroduces the Group FaceTime feature that was removed during the iOS 12 beta testing process.

Group FaceTime is designed to let iPhone, iPad, and Mac users conduct video and audio chats with up to 32 participants at one time, with new camera effect features like filters, stickers, Animoji, and Memoji included.

Subscribe to the MacRumors YouTube channel for more videos.
Unfortunately, Group FaceTime is limited on older Apple devices. On the iPhone 5s, iPhone 6, and iPhone 6 Plus, it is available in an audio-only capacity with no video. In its recently released iOS 12.1 user guide, Apple says that Group FaceTime video is not compatible with these devices. 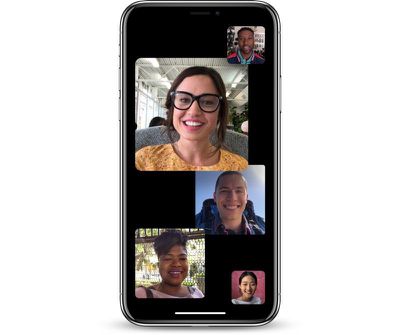 Group FaceTime calls can be initiated via the FaceTime app or through a group conversation within the Messages app. When you're on a Group FaceTime call, the interface is organized into tiles, with the tile of the person speaking at the time getting larger so you can focus on each person.

Like regular FaceTime calls in iOS 12, Group FaceTime calls support a range of camera effects so you can use stickers, Animoji, Memoji, and filters during your calls.

Group FaceTime supports ringless notifications to let people join calls without disrupting conversations already in progress, and there are built-in tools for seamlessly adding or removing people from your chat. For more details on how to use Group FaceTime, make sure to check our our Group FaceTime walkthrough and how to.

That's good. People on older devices are now forced to update if they want Group FaceTime.

I don't think group facetime is a killer feature to force people to upgrade 4 year old phones. Likely if they're holding onto their phones now, they still will.
[doublepost=1540929360][/doublepost]

If this were limited to the latest phones, you'd have a real case for this. But phones that were released ibefore 2014 are lucky they receive updates at all.
Score: 11 Votes (Like | Disagree)

madKIR
In other words, it’s available in its full capacity on the devices with at least 2 gigs of RAM. There go all those Apple defenders claiming that 1 gig was enough lol
Score: 9 Votes (Like | Disagree)

That's good. People on older devices are now forced to update if they want Group FaceTime.

Yay! Still rocking my 6S, IMO it's still the best of the iphones and certainly the best for my specific needs. Facetime is the best app for those with limited data connections. I tried several when in the Scottish Highlands where the WiFi was <1meg and it was the only one that gave great image and sound quality. Hangouts and Skype (the major other options) were awful by comparison.

Will be the end of my ios journey though when it dies. Apple's priced me out of the market.
Score: 4 Votes (Like | Disagree)

Then why offer it on anything older than an Xs or Xr?

I am sure they wanted the full experience, or audio only, as a way to bring consistency for users.
Score: 3 Votes (Like | Disagree)
Read All Comments