Apple's AirPods Out of Stock in Many European Countries [Update: Back in Stock]

AirPods are sold out and unavailable for purchase in many Apple retail stores across Europe and in Apple's online stores in those countries, as noticed by French site Watch Generation.

It's not clear when the AirPods went out of stock, but the earphones are listed as unavailable in countries that include the UK, Ireland, Germany, France, Czech Republic, Denmark, Spain, Italy, Luxembourg, the Netherlands, Norway, Portugal, Poland, Finland, Sweden, and others. 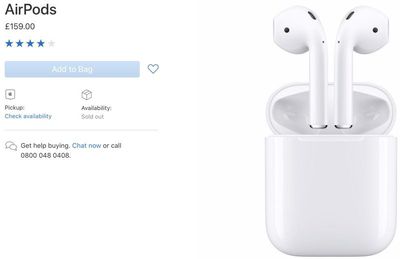 AirPods continue to be available for purchase in other countries in North America, South America, and Asia Pacific, with the shortage primarily limited to Europe.

There's no word on why AirPods are suddenly unavailable in so many European countries, but Watch Generation claims that a retail source said French Apple Stores sold out of a recent shipment and are awaiting the restock of a new version that could perhaps be next-generation AirPods.

Given that the AirPods are unavailable only in Europe, there could be another explanation related to tariffs or currency adjustments, so the shortage is not a clear sign of an imminent refresh.

Apple is rumored to be working on second-generation AirPods with an improved wireless chip that will enable "Hey Siri" functionality, alleviating the need to activate Siri through a double tap on the earphones.

Update: AirPods are once again in stock on the Apple online store in many European countries, with retail locations set to have the earphones available for purchase on Friday, October 19.

ghostface147
A volume slider would be awesome, if it's even feasible.
Score: 10 Votes (Like | Disagree)

brian3uk
OH MY GOSH. I really hope that means new ones are on the way!
Score: 7 Votes (Like | Disagree)

AppleWarMachine
mine work great, but I will update them to get the new ones with Bluetooth 5.0 to match my phone and watch ;) (I can't believe it's almost been 2 years with them already)

omihek
The week after purchasing my AirPods was the best week of my life musically speaking. I just had no idea how much that cord limited me before I went wireless. If the AirPods 2 have enough features to upgrade, I will happily give up another $160 for them, even though my first pair still works perfectly.
Score: 6 Votes (Like | Disagree)

I saw someone wearing airpods on the bus this morning - first time I’ve seen them in months..
Whereas a dozen or so people on the bus every day are wearing over-the-ear style wireless headphones.. JBL, Bose, Sennheiser, and occasionally Beats.

Wireless is clearly the future, but these little earphone thingies just don’t deliver the musicality, or the sound isolation. (Or the noise reduction that increasing numbers of new headphones support..)

Don’t know where you live but here in the Netherlands I see them everywhere, train, bus, gym, joggers, cyclists etc.
Score: 5 Votes (Like | Disagree)

munpip214
Don't trust any rumors about new airpods anymore. Will believe it once I have them in my pocket
Score: 4 Votes (Like | Disagree)
Read All Comments