Police in the United States are being advised not to look at iPhone screens secured with Face ID, because doing so could disable facial authentication and leave investigators needing a potentially harder-to-obtain passcode to gain access.

Face ID on iPhone X and iPhone XS attempts to authenticate a face up to five times before the feature is disabled and the user's passcode is required to unlock the smartphone. 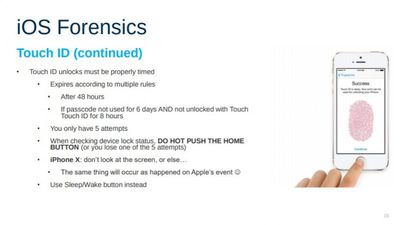 Elcomsoft presentation slide talking about Face ID (image via Motherboard)
Given the way the security system works, Motherboard reports that forensics company Elcomsoft is advising law enforcement, "don't look at the sceen, or else... the same thing will occur as happened [at] Apple's event."

The note appears on a slide belonging to an Elcomsoft presentation on iOS forensics, and refers to Apple's 2017 presentation of Face ID, in which Apple VP Craig Federighi tried and failed to unlock an iPhone X with his own face, before the device asked for a passcode instead.

Apple later explained that the iPhone locked after several people backstage interacted with it ahead of Federighi, causing it to require a passcode to unlock.

The advice follows a recent report of the first known case of law enforcement forcing a suspect to unlock an iPhone using Face ID. The action subsequently helped police uncover evidence that was later used to charge the suspect with receiving and possessing child pornography.

In the United States, forcing someone to give up a password is interpreted as self-incrimination, which is protected by the Fifth Amendment, but courts have ruled that there's a difference between a biometric recognition system like Touch ID and a passcode that you type into your phone.

In some cases, police have gained access to digital data by forcing people to unlock mobile devices using their fingers. Indeed, before Face ID was in use, law enforcement was advised how it could avoid locking Touch ID fingerprint-based authentication on Apple's iPhones.

"With Touch ID, you have to press the button (or at least touch it)," Vladimir Katalov, CEO of Elcomsoft, told Motherboard. "That's why we always recommend (on our trainings) to use the power button instead, e.g to see whether the phone is locked. But with Face ID, it is easier to use 'accidentally' by simply looking at the phone."

The only reason my mom has her phone returned to her was because she had it locked and used Find My iPhone - the young kid who stole it quickly realized with it locked that he couldn’t resell it - with a completely open device it is easily resold and I can’t imagine you’d ever get it back.
Score: 69 Votes (Like | Disagree)

So, if a scammer finds you phone, he can easily misuse your phone in his scamming attempts. Much easier to social engineer someone at at your bank etc when they can call from your number. Plus full access to emails+++

That you don’t have anything to hide might be the least important factor when you consider wether to secure your phone or not.

Enjoy the milliseconds you save compared to faceID; you will need them all (and more) when you’re cleaning up after a scammer that got to your phone.
Score: 62 Votes (Like | Disagree)

flyingspur
Side button and volume up or down button a couple seconds, Face ID disabled.
Score: 50 Votes (Like | Disagree)

That’s so ridiculous, I don’t even know where to begin.
Score: 34 Votes (Like | Disagree)

While you're waiting for Apple to make an official method, some clever person/people came up with this Shortcut:
https://www.icloud.com/shortcuts/2d68cb1ee7b84f08ace2fd600b9855b5
Based on what MacRumors member rjtyork posted it does the following:
"Just by saying “Hey Siri, I’m getting pulled over”, Siri will pause your music, turn on do not disturb, send your location and a message to pre-determined contacts, dim your screen, start recording video from your front camera, upload that video to iCloud Drive or google drive, and send the video to any contacts you choose."
Score: 28 Votes (Like | Disagree)

826317
Would be nice to have an anti-law enforcement feature that makes it as easy as possible to completely lock out any law enforcement official.
Score: 25 Votes (Like | Disagree)
Read All Comments