Apple CEO Tim Cook tonight announced that Apple will be donating to recovery and relief efforts for those in the Gulf Coast region who are located in the path of Hurricane Michael. 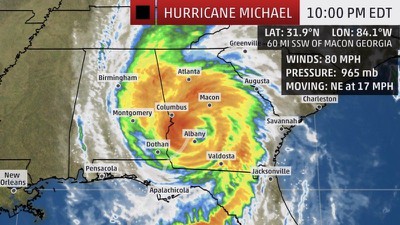 Image via The Weather Channel
Hurricane Michael made landfall in Florida earlier today causing widespread devastation with winds up to 155 miles per hour. It is now making its way across Georgia and is expected to hit several states in the southeast, including Alabama, South Carolina, North Carolina, and Virginia.

I grew up on the shores of the Gulf Coast, near Pensacola and Mobile, and that region holds a special place in my heart. That’s never been more true than now. To all those communities in the path of Hurricane Michael, you are in my prayers. Please stay safe. — Tim Cook (@tim_cook) October 11, 2018

When the hurricane hit Florida, it was classified as a Category 4 storm, the strongest to hit the continental United States since Hurricane Andrew. It has now weakened to a Category 1 storm, but has done serious damage and left hundreds of thousands without power.

Apple is standing with our friends and neighbors in the Gulf Coast region, and will be donating to recovery and relief efforts. — Tim Cook (@tim_cook) October 11, 2018

Cook did not say how much Apple plans to donate, but for other recent hurricane disasters, the company has provided $1 million in aid.
Tag: Tim Cook
[ 55 comments ]

budselectjr
You have to live a pretty miserable and lonely life if you complain about other people not donating enough.
Score: 22 Votes (Like | Disagree)

Titli struck India at the same time. Will Apple do anything for India?

Did Tim Cook grow up in India and have a personal connection to it?
Score: 13 Votes (Like | Disagree)

Is Apple owned by Timmy or shareholders all over the world?

It’s an American company. Despite the fact that they are massive and do business worldwide, they are American. It makes sense they focus more on natural disasters in their home country. I used Tim Cook to make that point.

Life must be hard when your always trying to find new controversies.
Score: 13 Votes (Like | Disagree)

BMcCoy
I would speculate that Tim and other highly paid employees at Apple - along with highly paid people in general - give personally to charity and disaster relief aid but do so without need to broadcast their generosity.
Score: 10 Votes (Like | Disagree)

weup togo
Apple's default one million dollar donations to these mass catastrophes are increasingly insulting relative to their profits. As far as virtue-signaling goes, it's the least expensive thing they do all year.
Score: 6 Votes (Like | Disagree)
Read All Comments

Tuesday May 4, 2021 1:54 pm PDT by Juli Clover
Apple's legal battle with Epic Games is continuing on, and during the second day of the trial, Epic Games' CEO Tim Sweeney continued his testimony against Apple. Sweeney was grilled by Apple's lawyers, and made several points seemingly favorable to Apple. In addition to mentioning how he prefers Apple's iPhone and values Apple's privacy policies that he's aiming to dismantle, Sweeney...
Read Full Article • 207 comments