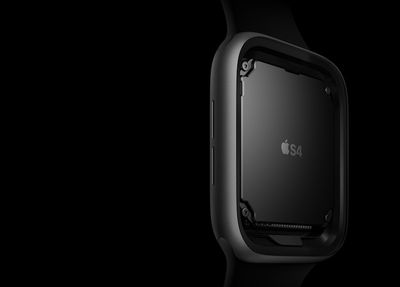 An eagle-eyed MacRumors reader has since pointed us towards Apple's Product Information Sheet, which contains battery capacities measured in watt-hours for several products, including Apple Watch Series 4 models. Apple appears to disclose this information for legal and safety reasons.

Despite having smaller batteries, Apple says Series 4 models get the same all-day battery life of up to 18 hours that Series 3 models are rated for. We reached out to Apple in hopes of an explanation, but we have yet to receive a response.

What we do know is that Apple Watch Series 4 models use a new display technology named LTPO that improves power efficiency. The new Apple S4 system-in-a-package also has more efficient cores, so they presumably consume less power as well. Other components could be more efficient too.

In general, however, battery life is simply hard to predict. Different customers have different use cases. One user could be an athlete who is constantly working out with the Apple Watch, while another could be a more casual wearer who taps on a few notifications once in a while and not much else.

All in all, we wanted to clear up some confusion surrounding the Apple Watch Series 4 batteries. They pack less juice, not more, but seemingly without compromising battery life. Over time, we'll see if that's truly the case.

benshive
They improved energy efficiency and were able to shrink the battery a bit in order to make the watch thinner while maintaining the same battery life is what I suspect. My Series 4 easily lasts all day.
Score: 32 Votes (Like | Disagree)

SVTmaniac
I’ll be the first, why not keep the same size battery and increase the usage time even more? Never makes sense to me.
Score: 29 Votes (Like | Disagree)

MrGimper
To be honest, I'm sure people would have preferred a slightly larger battery vs the 1mm reduction in thickness.
Score: 27 Votes (Like | Disagree)

powaking
Um 18 hours? I just wore my watch for 23 hours (and yes that includes using Sleep++ to track my sleeping) and my watch still had 65% battery left. I've been wearing my watch since 7 eastern and right now I have 88% left. I don't see why anyone couldn't get through a day easily with the series 4.
Score: 18 Votes (Like | Disagree)

OldSchoolMacGuy
Not hard to figure out. More efficient processor means same battery life even with a slightly smaller battery.
Score: 16 Votes (Like | Disagree)

To be honest, I'm sure people would have preferred a slightly larger battery vs the 1mm reduction in thickness.

I guess speak for yourself. The battery life for my S4 LTE 44mm so far has been perfectly adequate. It's 2 pm and I'm still at 93%. My S0 would be dead in about 4 hours from now, but it's old so hardly worth comparing against.

For me, I'll take a smaller package with this kind of battery life.
Score: 12 Votes (Like | Disagree)
Read All Comments