iFixit has completed a teardown of the Apple Watch Series 4, providing a look inside a larger 44mm model with LTE. 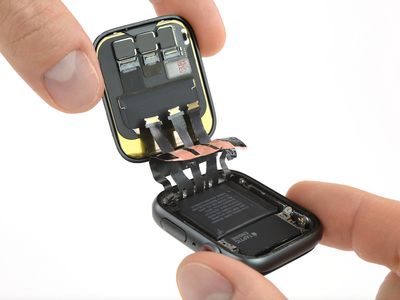 Image Credit: iFixit
The repair experts believe that while the original Apple Watch was awkwardly layered together and used too much glue, the Series 4 lineup feels "much more thoughtfully laid out," likening it to the iPhone 5.

Apple pundit John Gruber has compared this to the leap in design brought by the iPhone 4, and we might even go a bit further and call it an iPhone 5: a device that knows its priorities, and wants to look as elegant inside as out.

At first glance, the internal design of Series 4 models looks more or less the same as previous models, with the battery and Taptic Engine taking up most of the space. Dig deeper, however, and the changes become evident.

iFixit says the Apple Watch Series 4 is nearing iPhone levels of repairability, with the highly-glued display being the primary remaining obstacle. Beyond that, they say the battery is straightforward to replace.

Image Credit: iFixit
All in all, the Series 4 received a "solid" 6/10 on iFixit's repairability scale, with 10 being the best possible score. That's the same repairability score iFixit gave the iPhone XS and XS Max in its teardown of those devices.

AngerDanger
It’s always awesome to be reminded of the fact that these are tiny computers strapped to your wrist. Each one is probably more powerful than the computers used to render dinosaurs in Jurassic Park.

donster28
What a beautiful piece of engineering!
Score: 13 Votes (Like | Disagree)

Just remove the Taptic engine and you got more batetery :confused:

but we need the taptic engine to get notifications without sound.
Score: 7 Votes (Like | Disagree)

One can distinguish between seals that can be opened and closed and something that is sealed by filling a gap with a material that is liquid originally and thus can enter all nooks and crannies. In particular with water, due to its surface tension, if a capillary connecting the inside with the outside becomes small enough, it is hermetically sealed (of the course the surface tension translates into capillary pressure which then has to be compared to the ambient pressure, but if we limit ourselves with ambient pressures a human can survive in that is a very attainable limit).

Obviously we are talking about devices here and not spoons, rocks and stuff stuff like that. But if we are going to be absurd that spoon you mention isn't water proof (eventually stainless will corrode, it is just resistant) and the glass encased thing you made up would shatter at depth if there were any voids whatsoever.

Currently there is no industry standard in order for a device to classify as waterproof and thus "waterproof" can not be claimed as a product feature. Even things like dive watches/computers/etc are merely water resistant.
Score: 4 Votes (Like | Disagree)

If the watch is waterproof and dustproof how does air pressure get to the barometer?

The barometer senses pressure, not dust and water. iFixit says they put it behind the speaker, open to the air.
The sensor is waterproof and dustproof. It means it is not damaged by water and dust. It doesn't mean it doesn't get wet or dusty.
Score: 4 Votes (Like | Disagree)
Read All Comments