With Apple Watch Series 4 models wending their way to Apple customers in the United States and many other countries today, some people have already picked up their orders and are sharing their first impressions of the new smartwatch online.

Apple Watch Series 4 owners on Reddit and the MacRumors forums appear to be particularly impressed by the larger screen and redesigned chassis. 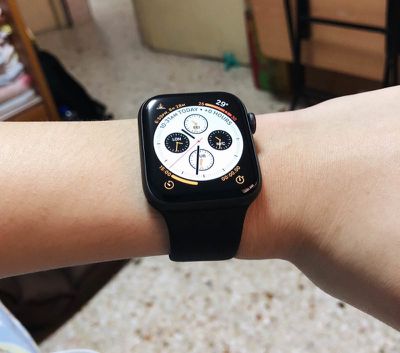 Image by Reddit user KaiiXiang
Reddit user bluebear74 said that "coming from a S0 to S4 is amazing," and expressed surprise at the amount of information the bigger screen is able to display: "There's so many complications I don't know what to do with them all!"

Having previously used a Series 1 model, Reddit user KaiiXiang in Singapore said they were "really blown away" by the new watch's screen and responsiveness, although they noted that Siri "still sucks" since it's "either slow or fails to pick up what I say most of the time."

Reddit user DisHowWeDo, who has small wrists (170mm) and had never owned an Apple Watch before, said they were "REALLY worried the 44mm would look huge on me," but ultimately found it to be "flipping perfect" and "definitely the right size."

Hermès Series 4 image by MacRumors forum member boardiesboi
Likewise, MacRumors forum member Suxamethonium was a little worried about the 44mm size when looking at it in the Apple Store app, but he now felt it was "pretty much perfect" for an average man's wrist. He also commented that the new watch faces "make much better use of all that real estate."

Perhaps surprisingly, several customers appear to have been caught off guard by the color of the Gold stainless steel Series 4 model, with one Reddit user calling it "quite pink... Like a rose gold." Another said they expected it to be a lot more gold and felt a bit disappointed, although they were "sticking with it," while MacRumors forum member defn felt the color "goes surprisingly well with a lot of watch bands."

This is my old 42mm S2 on the left and new 44mm on the Right. There's really not that much difference in them size wise.

Glad I didn’t upgrade. Way too minor of an update.

When you say it is a minor update - It has gone from being a 32 bit processor to 64 bit. That's a massive change before even starting on the rest.

Just don’t want tech on my wrist. My phone bothers me enough when it goes off throughout the day, the thought of adding yet another device to deliver notifications gives me a headache lol

My plan is to quit the phone most of the times and only go out with a LTE Apple Watch, to force myself to reduce activities that harm my focus during the day.
Score: 19 Votes (Like | Disagree)

philipc121
I'm incredibly happy with mine! Very quick into the store, served very quickly, and the whole unboxing was a delight!

The new screen size is a significant upgrade over the old version — everything is just so much easier to read and navigate around. The haptic crown scrolling is a nice little touch. The additional height (44mm v 42mm) feels like nothing really —it's certainly not some mammoth watch, and while it's only slight it does feel notably thinner. And it's very quick & responsive too.

One hour to go before my expected delivery window starts. Already looking at the front door every 2 blooming mins.

Not like it's going to arrive any earlier... :rolleyes:

Update: Now showing "Your Driver Steve will deliver between 1433 and 1533 today!
Come on Steve put yer foot down! :)

I need to get to an apple store asap, that 44mm looks massive (not a fan)

I think the photos make it look bigger than it actually is..
Score: 14 Votes (Like | Disagree)

The watch looks nice. But I’m still not moved to buy one...

Just don’t want tech on my wrist. My phone bothers me enough when it goes off throughout the day, the thought of adding yet another device to deliver notifications gives me a headache lol

I feel like I am less stressed about notifications now, after getting the Series 3 in spring. I can quickly glance at the watch and see if it's important, then ignore most of it. When I didn't have the watch, I would feel the taptic engine tap/hear the chime, take my phone out of the pocket, realize it wasn't important, then open Facebook, because you know, I already have the phone out of my pocket, so might as well... etc. etc. Much less usage of the phone now :)
Score: 12 Votes (Like | Disagree)
Read All Comments