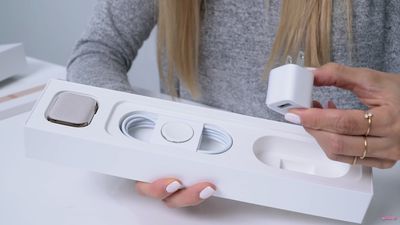 Image via iJustine
To start off, iJustine unboxed the Apple Watch Series 4 40mm Gold Stainless Steel Case with a Milanese Loop, as well as the Hibiscus Sport Loop and Lavender Sport Band. Apple changed up the packaging for the Series 4, and instead of a square box for stainless steel cases, this year the higher-end Apple Watch models also come in a rectangular box.
The outer packaging opens up to reveal Apple Watch artwork, and inside there are two separate boxes: one holding the Apple Watch, charging cord, power brick, and paperwork, and the second holding the Apple Watch band.

Image via Emkwan Reviews
YouTuber Emkwan Reviews unboxed the same Apple Watch as iJustine, but in 44mm instead of 40mm.
Spanish YouTuber Victor Abarca unboxed the Apple Watch Series 4 with the 40mm Space Gray Aluminum Case, showing off packaging that mimics the stainless steel Series 4's packaging. Aluminum owners will see the same pull tabs on the back of the packaging that opens up to two separate boxes inside, one holding the Apple Watch and another holding their band of choice.

Additionally, it appears that if you get the Space Gray Apple Watch, the small fabric sleeve protecting the case will also be Space Gray.


Apple's decision to package each version of the Apple Watch the same in 2018 is a big difference from previous Apple Watch generations. For the Apple Watch Series 3 and prior versions, the aluminum Apple Watch models came in slimmer, rectangular boxes, while the premium stainless steel models were encased in larger, square boxes that included the plastic case.

The Apple Watch Series 4 will launch tomorrow, September 21, so the first pre-order customers can expect to receive their Series 4 devices throughout the day on Friday. After reviews for the Apple Watch Series 4 praised the smartwatch's display and health benefits, Apple highlighted some review snippets on its website.

Prof.
Off topic but not really... iJustine is so annoying.
Score: 55 Votes (Like | Disagree)

Off topic but not really... iJustine is so annoying.

I was going to write the same! AHAHAHA Annoying AF!
Score: 19 Votes (Like | Disagree)

All these youtubers are annoying. I’m guessing they don’t buy these as they get them before launch. Get a job and earn your gadgets.

Reviewing and commenting about tech literally is their job. I'm sure they earn everything they get... just like you do at your job. They just have different ancillary benefits (early access to tech) than you do with your gig.
Score: 14 Votes (Like | Disagree)

You have no obligation to listen to any youtuber you find annoying. Why the need to let everyone know?

To find people to commiserate with.
Score: 13 Votes (Like | Disagree)

I was going to write the same! AHAHAHA Annoying AF!

All these youtubers are annoying. I’m guessing they don’t buy these as they get them before launch. Get a job and earn your gadgets.
Score: 12 Votes (Like | Disagree)
Read All Comments