Tim Cook on iPhone XS: People Want the Most Innovative Phone Possible and 'It's Not Cheap to Do That' 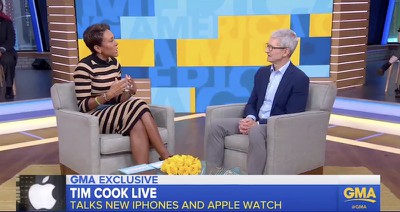 He pointed out that all of the technology included in the iPhone, replacing previous separate gadgets like MP3 players and digital cameras, requires each smartphone to be priced at a premium. Cook also mentioned Apple's aim to "serve everyone," which he mentioned in an interview last week.

Roberts: "One model starts at almost $1,100, are you afraid that a group of people are being priced out?"

Cook: "Well we want to make an iPhone for everyone, that's always been our objective and we've got several iPhones in the line and they go down to materially lower. But if you look at this phone, it's the most advanced iPhone we've ever done.

Cook then discussed the tariff situation, explaining that while the iPhone is assembled in China, parts of the device come from all over the world, including the United States.

The iPhone is assembled in China, but the parts come from everywhere. Including the United States, you know, the glass comes from Kentucky, there are chips that come from the U.S., and of course the research and development is all done in the United States.

So, I don't want to speak for them, but I think they looked at this and said that it's not really great for the United States to put a tariff on those type of products.

In regards to potential blowback from the Chinese government on this tariff exemption, and how this could impact consumers, Cook says he's optimistic that the U.S. and China will sort the situation out.

The topic then moved onto the company's record trillion dollar valuation, which it hit in early August, making it the world's only trillion dollar publicly traded company in terms of market capitalization. Cook says that, from his point of view, Apple "could only have been created in America," and as such he and his executives feel a responsibility to help the country thrive, including creating jobs and encouraging coding in public schools.


"And so we do that in terms of creating jobs, we've created 2 million jobs in America. We want to create even more, we're investing $350 billion in the country over the next five years and we're starting up facilities in a number of different places. We're really proud of that contribution, but we want to do more.

KJL3000
Is Tim actually explaining the higher prices today with built-in gadgets like camera and music player (without headphone jack, btw)?? This was a valid argument 10 years ago. Now it’s obviously a very lame excuse for justifying insane prices.

nortonandreev
I don't think it's "the most innovative phone" if it's exactly the same as the last one.
Score: 71 Votes (Like | Disagree)

BootsWalking
He pointed out that all of the technology included in the iPhone, replacing previous separate gadgets like MP3 players and digital cameras, requires each smartphone to be priced at a premium

That happened 11 years ago Tim.

0008652
The world doesn’t only revolve around the U.S., I don’t have a 30$ monthly deal with my carrier nor do I get the iPhone upgrade program.

I would also love to hear his reasoning behind the inflated pricing in Europe. Even if I add a 20% tax on the dollar prices, the difference is noticeable.

Moreover, even though I could buy it I simply won’t. I cannot connect it to a screen and keyboard/mouse and magically have a Mac. It is still a phone with an ok camera (compared to a compact camera) that softens the details way too much.
Score: 57 Votes (Like | Disagree)

You could do all of that 10 years ago already, when iPhones were generally much cheaper. As far as I can see, there's no mention of the innovation that would justify the recent price increase.
Score: 45 Votes (Like | Disagree)
Read All Comments

Monday June 21, 2021 7:17 am PDT by Hartley Charlton
Users appear to be underwhelmed by Apple's upcoming iOS 15 and iPadOS 15 updates, according to the findings of a new survey by SellCell. The survey asked 3,000 iPhone and iPad users, evenly split between men and women, aged 18 or over in the United States, what they thought of iOS 15, iPadOS 15, and the naming of the upcoming iPhone 13 lineup. Over 50 percent of all of the survey's...
Read Full Article • 361 comments

Monday June 21, 2021 7:07 am PDT by Joe Rossignol
Following widespread reports that the iPhone 12 mini has experienced poor sales performance, at least relative to other iPhone 12 models, Taiwanese research firm TrendForce today claimed that production of the device has already ended. According to TrendForce, the iPhone 12 mini "reached End-of-Life ahead of time" during the second quarter of 2021, suggesting that Apple will focus on selling ...
Read Full Article • 171 comments