Tim Cook on iPhone Prices: 'We Want to Serve Everyone' 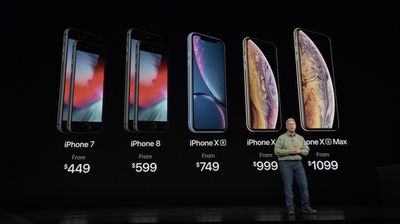 Commenting on this price range in an interview with Nikkei today, Apple CEO Tim Cook said, "We want to serve everyone." Apple introduced the iPhone XR at a cheaper price point so that customers who wanted the advantages of the iPhone X line -- Face ID, an edge-to-edge screen -- could find them on a lower-cost iPhone.

"We want to serve everyone," Cook said in an interview with Nikkei. "We understand that there is a wide range of what customers are looking for and a wide range of prices that people will pay."

Likewise, the iPhone XS Max represents Apple's biggest iPhone yet, and serves the customers who enjoyed the features of the 2017 iPhone X, but wished it came in a larger size.

"We always thought ... that if you provide a lot of innovation and a lot of value, there is a segment of people who are willing to pay for it," Cook said. "For us, it's a large enough group of people that we can make a reasonable business out of it."

Discussing the iPhone in general, Cook says that, "The role of the iPhone has become much larger in people's lives," and that will justify the price of the devices for many customers.

Those interested will be able to pre-order their iPhone XS or iPhone XS Max beginning tomorrow, September 14, and the smartphones will then launch on September 21 in over 30 countries and territories. The iPhone XR will go up for pre-order in about a month, on Friday, October 19, and then launch on October 26.

oldmacs
What by removing the low price option?

By removing the small screen option?
Score: 143 Votes (Like | Disagree)

*due to how contracts used to work in the US
Score: 79 Votes (Like | Disagree)

What by removing the low price option?

By removing the small screen option?

dantastic
In this day and age 64GB should not be an option. This pricing model is nothing but self serving.
Score: 69 Votes (Like | Disagree)