MacPaw today announced the launch of CleanMyMac X, an updated version of the CleanMyMac software that's designed to help users get rid of unwanted files and clean up space on their Macs.

According to MacPaw, CleanMyMac X offers up a new Malware Removal option along with 14 tools for optimizing macOS. It also offers a Menu app for quick access to CleanMyMac X options, an extended Safety Database, and personalized cleanup tips. 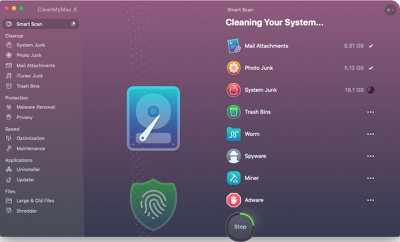 A Smart Scan feature offers up a quick, complete scan of the Mac with options for Cleanup, Protection, and Speed to remove unnecessary system junk and malware while also offering performance optimization tips.

Scanning with CleanMyMac X is up to three times faster than the previous CleanMyMac 3 software, while the newly implemented Malware Removal tool will check for vulnerabilities and get rid of suspicious files.

An optimization module provides tools for managing login items, launch agents, and apps that are absorbing too many system resources, and a built-in assistant will provide explanations, reminders for regular checkups, and additional optimization steps that are meant to improve performance.

All of these tools are run when using the Smart Scan option, but there are also individual controls for cleaning up system junk, photo junk, mail attachments, trash bins, and iTunes junk.

Malware scans can also be conducted individually, as can optimization scans, and there is a built-in uninstaller and updater for application management.

MacPaw is charging $39.95 per year for a subscription to CleanMyMac X, or $89.95 for a one-time purchase, but the new software is also included in Setapp, MacPaw's Mac software subscription service priced at $9.99 per month.

Setapp offers more than 100 apps for the $9.99 per month price tag, including titles like iStat Menus, Bartender, Ulysses, Canary Mail, and more.

Note: MacRumors is an affiliate partner with MacPaw. When you click a link and make a purchase, we may receive a small payment, which helps us keep the site running.

keysofanxiety
I'm a big fan of this site and understand you need to make ends meet, but there needs to be a point where your editorial ethics take hold.

This is a crap program and you should, if anything, be discouraging people from using it. I don't care if you're an affiliate partner. If this is the stuff you'll be promoting for money, then myself and others will happily stop being contributors.
Score: 101 Votes (Like | Disagree)

What’s so bad about it? Been using it since like 2011 almost weekly

Can you briefly explain why you are saying this is crap and why you would discourage people from using it? That would be very helpful for me and others who may have OS-OCD lol

Why is it a crap program? Asking for a friend.

Every time I see CMM mentioned there are these arguments. I don’t know why.

MalwareBytes correctly detects this application as a PUP (potentially unwanted program). That should say enough, but I'll expand.

It's very aggressively marketed and incorrectly promotes the idea that you need to carry out constant maintenance on your Mac. This is profoundly wrong.

Full of nice little animations to satisfy the Candy Crush generation. This tricks people into thinking their Mac’s running faster as a result — yet a simple restart would do just as much, which CMM will do anyway. It’s amazing how much goes wrong on macOS with a large 30 day uptime.

You don’t really know what it’s deleting. Not only is this incredibly dangerous but there have been instances where it’s caused damage to the operating system.

It used to be promoted as “on average, clears 50GB of data from a Mac.” On average. Now that’s either one of two things: an outright lie, or a terrifyingly high number. That should not be right.

Furthermore the people who defend it always seem to go back to the argument: “Well I’ve always used it and it’s never done any damage.”

As if that’s the criteria for a good application. It’s never bricked my computer so it must be fine, right?

This application promotes ignorance about both good computing habits and how macOS works. At the absolute best case scenario, there are many other free apps which do the same thing CMM does and provides more information on what they’re doing.

There are countless seas of threads about this. Avoid cleaner apps on both Mac and Windows. Practice good computing habits and use MalwareBytes. It’s as simple as that.
Score: 34 Votes (Like | Disagree)

eroslws
This app is a waste of money. Just use DaisyDisk to locate and clean up stuff if your computer is really full of junk. Anything else you’re clearing out will slow down your computer temporarily as cache is rebuilt...unless of course you believe this company has insider knowledge above and beyond that of Apple’s own engineers. Remember, remnants of old apps are smaller than the CMMs install file and if they aren’t, DaisyDisk will make that obvious.
Score: 26 Votes (Like | Disagree)

SBlue1
Hey Macrumors, can you please mark ads like these at the beginning so people don't get fooled think its an editorial article but an ad? Thank you!
Score: 20 Votes (Like | Disagree)

I'm a big fan of this site and understand you need to make ends meet, but there needs to be a point where your editorial ethics take hold.

This is a crap program and you should, if anything, be discouraging people from using it. I don't care if you're an affiliate partner. If this is the stuff you'll be promoting for money, then myself and others will happily stop being contributors.

This is one of the better posts I’ve seen on Macrumors. Good job, sir.
Score: 14 Votes (Like | Disagree)

Heineken
Almost as bad as mac keeper. stay away. If you want to clean something use OnyX it's free and does what is needed.
Score: 14 Votes (Like | Disagree)
Read All Comments

Saturday April 17, 2021 4:43 am PDT by Sami Fathi
Reliable leaker known as l0vetodream has hinted that Apple may debut its rumored redesigned and colorful iMac at its "Spring Loaded" event on Tuesday, April 20. In a tweet, the leaker posted an image of Apple's logo used for marketing the upcoming event and an image of the retro rainbow Apple logo alongside the colorful lineup of G3 iMacs. Apple leaker Jon Prosser previously reported that...
Read Full Article • 282 comments

Monday April 19, 2021 6:37 am PDT by Hartley Charlton
Apple is planning to launch a new entry-level iPad, iPad mini, and iPad Pro at its "Spring Loaded" event tomorrow, along with "a few surprises," according to Wedbush analysts. In a new note to investors, seen by MacRumors, Wedbush analysts Daniel Ives and Strecker Backe explained that the iPad will be the main focus of Apple's "Spring Loaded" event, with new entry-level iPad, iPad mini, and ...
Read Full Article • 182 comments

Monday April 19, 2021 11:30 am PDT by Juli Clover
The upcoming 12.9-inch iPad Pro will be thicker than the previous-generation version, likely due to the inclusion of the mini-LED display. We've heard several rumors about the change in thickness, and now leaked design images have confirmed it. A source that designs accessories for Apple devices sent MacRumors a series of photos that feature exact dimensions for the new iPad Pro models, and...
Read Full Article • 221 comments

Monday April 19, 2021 7:51 am PDT by Sami Fathi
Following the removal of the app in January, Apple will now allow the social media app Parler to return to the App Store following changes to how the social media network moderates content, CNN reports. On April 14, in a letter to Sen. Mike Lee and Rep. Ken Buck obtained by CNN, Apple said that the app has improved the way it moderates content, and says those changes are "sufficient" for it...
Read Full Article • 261 comments