During quarterly earnings calls, Apple CEO Tim Cook often boasts about the high rate of customers who are switching from Android devices over to iPhones. Recent research data has suggested Android switchers account for 15 to 20 percent of iPhone purchases. 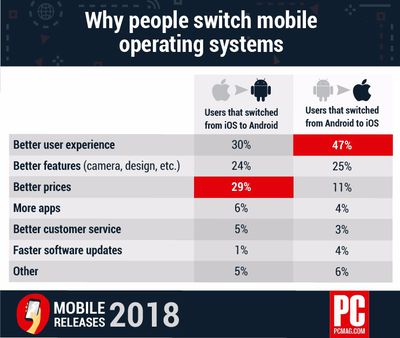 18 percent of customers who switched mobile operating systems went from Android to iOS, while just 11 percent dropped iOS for Android.

47 percent of customers who switched over to iOS from Android said that they chose to do so for a "better user experience," while 25 percent cited "better features" like camera and design.

On the Android side, customers switching to Android from iOS cited better user experience and better prices as the main reasons why they chose to adopt a new operating system.

While there were a small number of switchers among those surveyed, 71 percent have never switched at all, remaining loyal to their operating system of choice. According to data shared earlier this year by Consumer Intelligence Research Partners, both iOS and Android have high customer loyalty rates.

It's difficult for smartphone companies to get customers to switch operating systems, and this has led Apple to lure Android users through a variety of methods, including trade-in options, ads touting iPhone features compared to Android devices, a Move to iOS app to make transitioning simple, and a "Switch" website dedicated to explaining all of the reasons why the iPhone is better than competing smartphones.

PCMag also shared a few other interesting data points that came from the Apple and Android customers it surveyed. Among customers who made a switch to a new operating system or are considering making a switch, 56 percent said they didn't care about new smartphone releases.

Apple may see a new wave of Android switchers over the course of the next few months with the launch of the 2018 iPhones. Android switchers typically choose larger "Plus" sized iPhones when switching and Apple is set to debut an iPhone with a 6.5-inch OLED display, the company's biggest iPhone screen to date.

Glass panels for the three iPhones coming in 2018
The 6.5-inch OLED iPhone will be sold alongside a 5.8-inch OLED iPhone and a 6.1-inch iPhone with an LCD and a lower price tag, which could also lure Android users. Rumors have suggested the 6.1-inch iPhone, which will offer up Face ID and an edge-to-edge design, could be priced somewhere around $700.
Tag: Android
[ 166 comments ]

redheeler
I'm surprised Better user privacy and security isn't a category. That alone is enough reason to switch to iOS in my opinion.
Score: 37 Votes (Like | Disagree)

Micool1
Wait, there are people who switch to Android for better customer service and faster software updates?!
Score: 19 Votes (Like | Disagree)

luvbug
Hmmm ... "security/privacy" wasn't even a category????? "Ecosystem", anyone, anyone?? I never really thought much of PCMag anyway.
Score: 15 Votes (Like | Disagree)

Yah know, Samsung ain't the only android phone manufacturer.:rolleyes: And Apple's CS ain't the best in the world. Hail, my wife had to wait for nearly an hour just to have a Genius look at her iPhone. There are lots of smaller manufacturers have outstanding CS. Very easy to talk to customer service rep and no lines. With big corps, you're just a number.

As for software updates. I'll have whatever they're smoking:D unless they mean custom ROMs (highly unlikely). Custom ROMs are updated weekly, even nightly. With android manufacturer's ROM, you're lucky to get ANY update.o_O

Apple does have the best customer service in the world. Check consumer reports and others.
Score: 12 Votes (Like | Disagree)

KPandian1
I am amused at the better customer service and faster software updates reasons for leaving iOS to Android.

@CerebralX - the comparison is correct; no other way here.
Score: 11 Votes (Like | Disagree)
Read All Comments