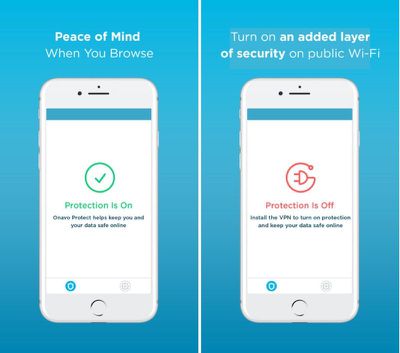 Earlier this month, Apple officials informed Facebook that the app violated new rules outlined in June designed to limit data collection by app developers, the person familiar with the situation said. Apple informed Facebook that Onavo also violated a part of its developer agreement that prevents apps from using data in ways that go beyond what is directly relevant to the app or to provide advertising, the person added.

Onavo, a free VPN, promised to "keep you and your data safe when you browse and share information on the web," but the app's real purpose was tracking user activity across multiple different apps to learn insights about how Facebook customers use third-party apps.

Whenever a person using Onavo opens up an app or website, traffic is redirected to Facebook's servers, which log the action in a database to allow Facebook to draw conclusions about app usage from aggregated data.

As of earlier this year, Onavo for iOS and Android had been installed on more than 33 million devices, giving Facebook a wealth of user data. Facebook was up front about the data collection in the app's description, but the data that was being collected is now above and beyond what Apple allows.

To provide this layer of protection, Onavo uses a VPN to establish a secure connection to direct all of your network communications through Onavo's servers. As part of this process, Onavo collects your mobile data traffic. This helps us improve and operate the Onavo service by analyzing your use of websites, apps and data. Because we're part of Facebook, we also use this info to improve Facebook products and services, gain insights into the products and services people value, and build better experiences.

It appears that the Onavo app has indeed been removed from the App Store at this time. People who have previously downloaded the app will still be able to use it, but it will no longer be updated. Onavo for Android will continue to be available.

Customers who have installed Onavo but do not want to be tracked by Facebook should uninstall the app from their iOS or Android device.

Update: Apple provided the following statement on the removal of Onavo: We work hard to protect user privacy and data security throughout the Apple ecosystem. With the latest update to our guidelines, we made it explicitly clear that apps should not collect information about which other apps are installed on a user's device for the purposes of analytics or advertising/marketing and must make it clear what user data will be collected and how it will be used.

ActionableMango
Massive privacy violations is exactly what everyone predicted would happen when it was revealed that Facebook was making a VPN. This is just one of those no-brainers.
Score: 16 Votes (Like | Disagree)
Read All Comments